By IAN PATTERSON
January 3, 2019
Sign in to view read count 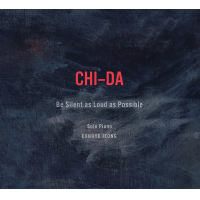 Boston-based, South Korean pianist Eunhye Jeong's second release as leader couldn't be more different from her debut, Turtle Suite (2015). That recording brought jazz and traditional Korean musicians together on a set of melody-based originals where Song Yi Jeon's wordless vocals were as much a protagonist as Jeong's elegant piano playing. Chi-Da, by contrast, is a solo piano offering of almost entirely improvised pieces. The sub-title to the album, Be Silent As Loud as Possible reflects the importance of silence to Jeong, both as starting points for musical ideas and as prominent punctuation within her improvisations.

Chi-Da translates as 'hit' and 'play,' an apt title given the percussive liberties Jeong takes with her piano and the playful spirit she exhibits. Jeong elicits a deep, humming vibration at the start of "Flesh and Bone," perhaps created by mallet on string. This is followed by intense strumming and damped-string hammering. A hefty left-hand pulse is countered by light, single notes with the right hand—a recurring juxtaposition throughout the album—while a brief flourish gives way to spare rhythms once again. The extremely delicate, upper register finale is a striking response to the slightly foreboding intro, and typical of the contrasts that abound in Jeong's language.

At times Jeong's playing is stuttering and spare, as on "One Bears Many," which features a chime-like ending; at other times, as on "Five Petals," the pianist is more expansive, inviting greater lyricism into her narrative. The fluctuating dynamics within the pieces result in drama of varying degrees; jagged versus flowing, stabbing versus caressing, circling versus linear-darkness and light. The one formal composition in the selection, "Mysterious Valley," pitches a slow, stalking left-hand motif against Jeong's knotty right-hand improvisations, the separate threads gradually shifting towards a middle ground where a cubist dance culminates in simplified unison.

There's also notable contrast between the individual pieces; from the rumbling rhapsody that is "Collapsing Stars," the adrenaline-fueled sprint to the finish in "Nal Ssi," and the stormy dissonances of "Weigh On" to the minimalist grandeur of the harmonically tense "Ulda," each improvisation has its own distinct character. Perhaps only on "Pictures of You," does the semblance of an overt influence briefly flicker as Jeong weaves a skewed Thelonious Monk-esque blues, however, she still asserts her personality, stretching time and finishing on a sombre note. An ominous bottom-end ostinato pulses through "Running Planets" as Jeong carves out a winding, staccato solo that culminates in a dramatic ascending progression.

At just under an hour and a quarter Chi-Da might prove challenging and even taxing for some, but there's no reason why these improvisational adventures can't be appreciated in small doses. For fans of improvised music and contemporary piano, or for those simply hungry for the unpredictable, this recording offers much. With Chi-Da Eunhye Jeong displays bold talent and creative energy in abundance.