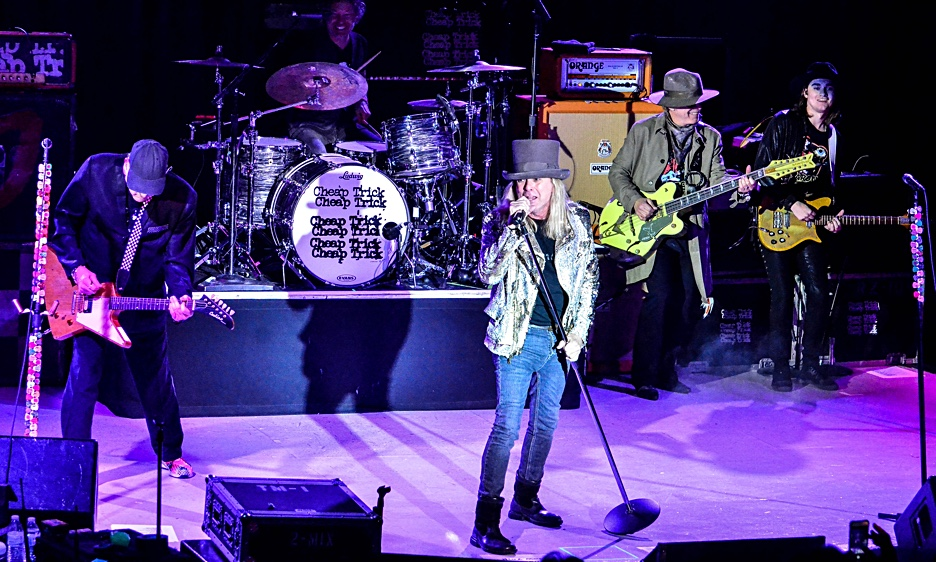 Cheap Trick has been delivering an arena/classic rock, hard rock, punk, modern rock and touch of blues mélange that consciously pays homage to Beatlesque pop. For well over 40 years, Rick Nielsen on guitar; Tom Peterrson on bass and Robin Zander on vocals, along with touring drummer Daxx Nielsen (Rick's son) and touring guitarist Robin Zander, Jr. have delivered a musical onslaught of crunchy pop chords and strong yet melodic vocals. The group's lyrics have been crafted with tongue planted firmly in-cheek. They are sly, wry and in many cases could definitely be described as having as many double entendres as possible.

The band was formed in Rockford, IL in 1973 and released its self-titled debut album on Epic Records in 1977. It first found success in Japan with the release of its second Epic Records album, In Color, later that year. Cheap Trick broke through and gained mainstream success with Cheap Trick at Budokan (Epic Records, 1979) propelled by the Top 10 single "I Want You to Want Me." In 1988 "The Flame" became a No. 1 hit single, and the album it was released on Lap Of Luxury (Epic Records) achieved platinum status. In addition to Cheap Trick at Budokan which went triple platinum in the U.S. and Lap Of Luxury, Cheap Trick also achieved success with Dream Police (Epic Records, 1979) which went to No. 6 on the Billboard 200 chart and was certified platinum within a few months of its release. Cheap Trick has also released other hit songs including: the cover of Fats Domino's "Ain't That A Shame," "Need Your Love," "Voices, "Gonna Raise Hell," "If You Want My Love," "She's Tight" with its innuendo-filled lyrics, the cover of Elvis Presley's "Don't Be Cruel," the cover of Big Star's song "In The Street" that was used as the theme song for the FOX comedyThat '70s Show and "Surrender."

In 2010, Bun E. Carlos, the band's original drummer, stopped touring with the band and Daxx Nielsen took over behind the skins. Over the course of its career, Cheap Trick has remained popular and has toured consistently. The band is reputed to have performed over 5,000 shows. On April 8, 2016 Cheap Trick was inducted into the Rock 'n' Roll Hall of Fame at the Barclays Center in Brooklyn, NY.

Aaron Lee Tasjan is singer-songwriter, guitarist, and record producer based out of Nashville TN. He grew up in New Albany, OH, about 25 minutes northeast of Columbus, OH. Tasjan likes to quip that, "Ohio is the home of the most U.S. Presidents and the most astronauts. That means it's the state with the most liars and the people that want to get as far away from Ohio as possible."

A child prodigy, Tasjan had performed with Peter Yarrow by the age of 16. He was offered a full scholarship to the Berklee College of Music and has received the Outstanding Guitarist Award in the Essentially Ellington Competition at Jazz at Lincoln Center in New York City. Tasjan has been a founding member of Semi Precious Weapons, performed as the lead guitarist with the New York Dolls and formed his own band, The Madison Square Gardeners, which was described by The Village Voice as, ..."the best NYC has to offer." Tasjan remained with them for three years, during which time they released the Taste The Thunder (2010), Teeth of Champions (2010) and Tune It Up, Dime It Out (2011) EPs on First of 3 Records. Tasjan's debut full-length solo effort, In the Blazes (First of 3 Records) was released in 2015. New West Records has released his two most recent efforts Silver Tears in 2016 and Karma For Cheap in 2018.

Tasjan is perfectly suited to open for Cheap Trick. His music is a tasty onslaught of crunchy pop chords and powerful yet melodic vocals. Some have described is as gritty indie folk. His lyrics are wily, ironic, witty and often feature clever wordplay.

On a cool early March evening Cheap Trick and Tasjan warmed the hearts of the Long Island faithful with a fantastic evening of powerful rock and pop. The evening's performance began when Tasjan and his band took the stage. Tasjan's British pop influences were clearly on display, as were his leanings toward twangy Americana, psychedelic-pop and indie rock.

Tasjan and his band appeared on the stage intimate venue's circular stage with the of the Westbury audience largely unaware of his music. In short time, Tasjan and his band connected with the audience and, by the end of the set, were the recipients of a rousing standing ovation. Highlights of his electrifying performance included "If Not Now When," "The Rest Is Yet To Come," "Songbird," "Dime" and "Memphis Rain."

After Tasjan and his band exited the stage, he did brisk business at the merchandise stand. His new fans were lined-up through the venue's lobby to purchase and get Tasjan to sign their copies of Silver Tears and Karma For Cheap.

Following a short intermission, Cheap Trick was introduced with what has become the classic quartet's usual, and by now expected, recorded preamble. A pleasant female stated, "Ladies and Gentlemen, Boys and Girls, please welcome to the stage, the best fucking rock 'n' roll band in the galaxy—Cheap Trick!"

As always, Cheap Trick stormed the stage. The band immediately launched into the opening numbers "Hello There," "Come On, Come On" and "Elo Kiddies." The ensuing two-hour performance was both ferocious and intense. On this evening, Zander, who was otherwise casually dressed in jeans, a Fender t-shirt and boots, chose to top his ensemble with a black top-hat. Rick Nielsen wore his customary shiny black sports jacket over a dark shirt, baseball cap and converse all-stars, while Petersson wore a trenchcoat, scarf, Aaron Lee Tasjan t-shirt, jeans and a hat that would have done J. Peterman proud. Daxx Nielsen was dressed for comfort in jeans and a t-shirt as he flailed behind his drum set. Touring guitarist Robin Zander, Jr. paid homage to the opening act by also wearing an Aaron lee Tasjan t-shirt. Frontman Zander spent the majority of the evening singing from the centerstage position with his son and Petersson to his left, and Daxx Nielsen on the drums in the rear. Rick Nielsen, though originally stationed by a microphone stand located on Zander's right, was everywhere. Nielsen, Zander and Petersson also spent a good portion of the show playing to the crowd seated on stage right, which was in close proximity to the band's roadie who was in charge of the guitars, basses and bottled water. Nielsen is quite the character. During the show, he joked with the crowd, tossed guitar pics to everyone and anyone and ran across the stage like a kid hopped-up on too much sugar. He did this while laying down a potent and formidable lead guitar.

After the opening trio of tunes, the show continued with strong versions of "Big Eyes," "Lookout" and "Hot Love." "If You Want My Love" and "Ain't That A Shame" had the fans in the aisles and dancing. "Need Your Love" had the audience members singing along with Zander.

Other highlights included: "The In Crowd" (a cover of the Dobie Gray song), "He's A Whore," "She's Tight" (with all the innuendo that the band could muster), the sing-along tunes "Voices" and the power-ballad "The Flame" as well as Petersson taking lead vocals on the Velvet Underground's "Waiting For The Man" which also featured a snippet of "Heroin."

The band really brought it home on "I Want You To Want Me" and a fever pitched version of "Dream Police" (with Rick Nielsen running across the stage, tossing full buckets of guitar picks into the audience and saluting various audience members).

Due to curfew and cabaret laws, the show had to end before 11pm. As such there were no encores, per se. However, what would have been the concert's ending numbers were still played. The band just chose to end the set with these tunes.

Tasjan joined the band for "Surrender" which was followed by "Auf Wiedersehen" and "Goodnight" (whose lyrics echo those of the show's opening number "Hello There").