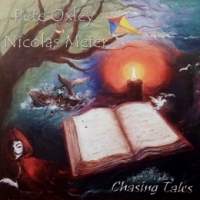 Pete Oxley and Nicolas Meier are guitarists. This is an accurate statement, but it goes only so far in describing the two musicians' virtuosity across a range of guitars and guitar-related instruments. Chasing Tales demonstrates their talents far more clearly than any written attempt to do so—between them, Meier and Oxley play around a dozen instruments and compose all but one of the tunes.

This is Oxley and Meier's second album as a duo but both men have wide experience as players. Oxley has released 12 albums under his own name and has played with the likes of Gilad Atzmon, John Etheridge and Bobby Wellins—he also runs the award-winning Spin Jazz Club in Oxford. Meier also has a series of albums as leader, as well as a spot in Jeff Beck's band. Both men are members of Eclectica!, a quartet that mixes jazz and classical players. Chasing Tales is itself a mix of inspirations that range from Turkey, Latin America and the English folk tradition.

The duo's first album, Travels To The West (MGP Records, 2012), was a live recording. Chasing Tales is a studio record and as such allows Oxley and Meier to make the most of the chance to overdub different instruments, creating rich layers of sound. Meier's "Riversides" features five instruments, including a glissentar solo, making the most of the 11-string fretless instrument's distinctive sound: another of his tunes, "The Followers," features four instruments with Oxley's fluid jazz guitar work grabbing the lion's share of the attention.

It's hardly Phil Spector's Wall Of Sound, however. The Oxley/Meier combination is characterised by a relaxed, contemplative approach that focuses on flowing melody and harmonic interplay rather than heavily accented rhythms and up-to-eleven riffing. Indeed, the quietest tunes leave the biggest impression. Oxley's gentle "Looking West," melancholy "Compass Points" and playful "Chasing Kites"—duets with each man playing nylon string guitar—leave plenty of space between the instruments, creating a sense of calm serenity.

The guitar synthesizer, in Oxley's capable hands, makes an appearance on a few tunes. On Oxley's "The Bridge" it's particularly up front, giving the tune an oddly comical feel that harks back to Roger Ruskin Spear's '60s electronic experimentation. Stringed instruments are at the heart of Chasing Tales, however, with Oxley and Meier forming a partnership that emphasises the beauty and purity of their sound.