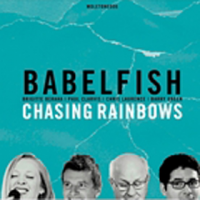 Lightness. Lightness of touch, of voice, of mood. That's the defining characteristic of Chasing Rainbows, the second album by UK quartet Babelfish.

The line-up is the same as that on debut album Babelfish (Moletone Records, 2012). Vocalist Brigitte Beraha and pianist Barry Green are the band's writers. Bassist Chris Laurence and drummer Paul Clarvis go well beyond the standard rhythm section role, bringing their own distinctive instrumental voices to the tunes.

Beraha must be one of the UK's most intriguing and imaginative vocalists. She has impressive technique and range, a command of vocalese and seemingly endless ideas about phrasing. Above all, her light, almost ethereal, quality stands out whether she's joyous ("You, Me And The Rest Of The World") or melancholy ("Heart, We Will Forget Him).

Many of these songs are wordless, Beraha transmitting emotions, moods, with no need for a lyric—given that the band shares its name with a small aquatic creature which, when placed in the ear, will translate all known languages in the universe, such a talent seems perfectly appropriate. On "Sushi Hero" she soars and swoops joyously, often doubled by Green's piano—the mood is infectious, transferred from Clarvis and Laurence's bouncy rhythm. The interplay between Green's spacious piano and Beraha's featherlight vocal tells a much sadder tale on "A Story Ends."

The choice of cover versions is unusual—Beraha and Green's duet on Aaron Copeland's "Heart, We Will Forget Him" segues into "I'm Always Chasing Rainbows" and there's also a sweetly bucolic take on Benjamin Britten's musical setting of William Butler Yeats' poem "Salley Gardens."

Green provides five confusions, one for each musician plus an ensemble confusion to end the set. They're brief, fun, pieces based around a five note phrase, treated light-heartedly. He's relatively kind to Clarvis—"Paul's Confusion" only lasts for 25 seconds as his brushes skip and skitter across the drums—but "Chris' Confusion" gives the bassist a full 129 seconds of angst, channelled into a dynamic, spiky, arco solo that ends with a triumphant bass growl. Beraha overcomes her own apparent uncertainties with just a few seconds remaining of "Brigitte's Confusion," a quiet "That's it" signalling her success—if anyone ever wants to make a musical version of Samuel Beckett's "Not I" Beraha's performance here makes her a shoe-in for the lead.

The press release that accompanied this copy of Chasing Rainbows included a brief, hand-written, note—"Be Charmed!" Instruction or prediction? If it was an instruction, there was no need. If it was a prediction—bang on the money.