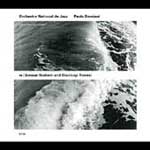 Diversity is the keynote of the Orchestre National de Jazz, led by Paolo Damiani, the first foreign musical director of the French Orchestra. The charms of the Mediterranean that sweep through the music are evoked by the many rhythmic patterns of the lands of the region. More, the compositions come from Damiani, Trovesi, Jeanneau and Brahem, each with his own perspective but with his eyes on the whole. In coming together, they have constructed an exciting musical travelogue. Credit should also go to the fact, and the perspective, of having Trovesi and Brahem as guest soloists during the Orchestra's 2000-2001 season.

The writing establishes many moods, weaves orchestral textures, and leaves room for players to craft their invention. The opening moments are the augury as a fanfare sweeps into dissonance and heralds "Sequenza Orfiche." The warm, broad strokes of the oud are the calm before the storm that seethes below the surface and as the ensemble slowly gains force, a roiling tempestuousness is countered by the horns supplicating in straight lines on top. De Pourquery adds to the dramatic temperament with bent notes and wails. The three movements of "Estramadure" are contrasts in movement and rhythm. The lure never diminishes from the sweeping acclamation of "Part 1," with Huby cavorting on the violin in quick changes of intonation atop the bass heavy punch of the drums a lead-in for Damiani to exult the beautiful melody on the cello. Trovesi is the bridge between the parts. His alto escarps and incises, a build-up to the last that rocks out as Benoit shafts scathing runs on the guitar.

Brahem brings a different hue to "Artefact." A Middle Eastern melody is drawn out of the oud, softly resplendent of a clear night filled with stars, gently stirred into another becoming sphere by Trovesi on the piccolo clarinet, the two of one soul as they explore the melodicism of the composition. Collignon is full bodied yet conveys a certain fragility on the flugelhorn for the second part, where he is joined by Jeanneau, their voices singing as one.

To leave it at that would be incomplete. The orchestra moves in with some dazzling play, the horns exult and it all winds up in an explosion of tone and color. The breadth of the compositions wrapped in memorable tunes, the open-ended arrangements and musicians who can cleave together or find their own path with an undeniable sense of direction, make this a rewarding experience.