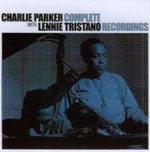 This recording, a fine addition to Charlie Parker's oeuvre, documents Lennie Tristano's extensions of the bebop idiom. Considered by some to be more of a cult figure with a small school of followers than a recognized major innovator of jazz, Tristano's contributions may now be viewed at in a better light. Parker's seminal place in the pantheon of jazz gods has long been established and rightfully so. Tristano himself once said, "If Charlie Parker wanted to invoke plagiarism laws, he could sue almost everybody who's made a record in the last ten years.

These 24 cuts are from five dates from 1947-1951. Bird is the undisputed star of each session, his blistering smooth runs winding in and out of the changes at will, his massive feeling given dramatic weight through rhythmic ingenuity and technical majesty at any tempo. Whether it's "Ko Ko, "Donna Lee, "Groovin' High, "How Deep Is the Ocean? or a "modernist" rarity, "Tiger Rag, Bird lives supreme.

Tristano added even more harmonic sophistication to bebop's already advanced sound palette by incorporating elements from 20th Century European classical music. Like Bud Powell, he played and composed with long, horn-like lines, very often with contrapuntal figures performed by melodic instruments. Although he supposedly lacked emotion, on these sessions he's right at home amongst the "hot" players of the day.

His solos flow with chromaticism and feeling; just hear him on "I Surrender Dear or "Don't Blame Me or "Overtime for an earful. His "Victory Ball (based on George Gershwin's "'S Wonderful ) is a showcase of his compositional inventiveness, and Bird flies after the breaks with customary brilliance.

Jazz cognoscenti may find the first two cuts, recorded by Bird on a tape machine at Tristano's home in 1947, most interesting. Mainly duets, with the addition of Kenny Clarke playing brushes on a telephone book, their versions of "All of Me and "I Can't Believe That You're In Love with Me lend themselves to a sigh at the thought of what might have been had the two collaborated more.