By Douglas Payne
October 1, 1998
Sign in to view read count 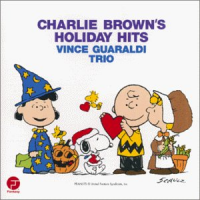 This nice little holiday gift is easily confused with the popular soundtrack to the 1964 TV special,A Charlie Brown Christmas. But don't be fooled. Nine of the 14 tracks included here are culled from the 15 Peanuts holiday specials Vince Guaraldi scored before his untimely death at age 47 in 1976 - and have never been released on disc before.

Some will even startle Vince Guaraldi fans. The lovely, melodic waltzes you can hum along to are all here. But it's surprising to hear Tom Harrell's trumpet take the lead on "Joe Cool," or the electric piano Guaraldi glides through on "Heartburn Waltz" or Eddie Duran's jazzy guitar lead on "Track Meet."

There are other special treats, though, and all place Guaraldi's piano out in front where it belongs. These include the lovely trio version of the "Charlie Brown Theme" (which is not the popular theme titled "Linus and Lucy," also included here), "Charlie's Blues," "Great Pumpkin Waltz," and "Thanksgiving Theme" (featuring Guaraldi comping on electric piano and leading on acoustic piano).

At 37 minutes, it's a little too brief, even with five familiar songs fromA Boy Named Charlie BrownandA Charlie Brown Christmas. But fans of Vince Guaraldi, (surprisingly) an unofficial member the Grateful Dead whose "Cast Your Fate To The Wind" is one of the all-time great jazz songs, will be pleased nonetheless. Both jazz lovers and casual listeners can enjoy this timeless music.