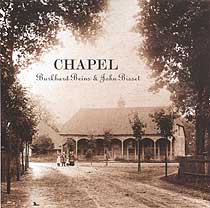 London-based John Bisset and Berlin-based Burkhard Beins have long collaborated in the annual London improv event Relay, and in the organisation of the 2:13 Clubs in the two cities. As a guitar and drums duo, they have an almost unlimited capacity to surprise. Over eight tracks, ranging in length from under two minutes to over twelve, they produce sounds that defy one to identify who is doing what—and how.

Both Bisset and Beins employ unconventional, exploratory techniques. Beins is renowned as the drummer who never hits anything (even if that is not strictly true), opting instead for alternative methods of causing vibrations such as scraping, scratching or using a bow. The end result is a far broader range of sounds than one expects from most drummers. (One example: On the recent UK tour by The Sealed Knot, for whom he is the drummer, Beins produced remarkable sounds by scraping together two large rough stones, one of which was in contact with the top of a drum, causing the vibration to be amplified by the drum.) Bisset is more conventional (maybe guitar provides less scope than drums?) but still produces sounds that are unfathomable unless one sees him play. (How does he produce that sound like someone brushing their teeth?) He employs percussive and tactile methods as much as plucking and strumming. And when he does use conventional guitar techniques, as on "Water," their effect is heightening by their rarity.

Given their long history, Bisset and Beins are intimately aware of each other's playing. This leads to almost telepathic reactions between them, making for rapid and appropriate responses. Lest you are in any doubt, the combination of Beins and Bisset is constantly fascinating, intriguing, even mesmerising.