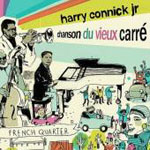 Simply because it was produced prior to Hurricane Katrina's devastating impact, Harry Connick Jr.'s New Orleans-themed album, Chanson du Veux Carré, has a different texture and tone than many of the impressive tribute albums the jazz world has delivered since that tragic event transpired. While many have sounded themes of lament, nostalgia, defiance, outrage and hope, Connick's venture is pure celebration—innocently recorded before Katrina transformed New Orleans into a symbol of loss, abandonment and political failure.

Conceived as a companion to the vocal album Oh, My Nola (Sony, 2007), Chanson is the third release in Marsalis Music's Connick on Piano series. It focuses as much on Connick's skills as an arranger as his piano chops. The album presents twelve big band tracks, including three penned by Connick, that effectively explore the diverse tapestry of New Orleans' native music. Included are de rigueur tunes by Armstrong ("Someday You'll be Sorry ), Bechet ("Petite Fleur ) and Professor Longhair ("Mardis Gras in New Orleans ), all of which receive appropriately respectful and clever treatments.

Excellently performed by a tight-knit cadre of musicians, Chanson delivers a reminder of the numerous contributions the great city of New Orleans has made to American culture by freezing in time a native artist's vision of its rich musical character at a time before the levees broke. (Appropriately, a portion of all proceeds from the album will be donated to New Orleans Habitat Musicians' Village, a project established by Connick and Branford Marsalis to provide affordable housing for displaced musicians and other families.)