By Jerome Wilson
August 6, 2019
Sign in to view read count 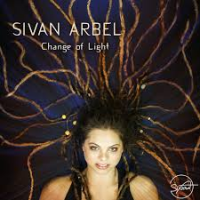 Sivan Arbel is a young singer with an angelic, elastic tone and the ability to write songs that marry contemplative lyrics to surging melodies with impressive power. Most of her songs use a wide range of sound dynamics, beginning softly with just voice and piano but slowly gathering force and instruments for a big, stormy climax where the musicians scream alongside the soaring passion of Arbel's singing.

Many of her works follow that pattern. "Omri" begins as a quiet creep with Arbel melting over Shai Portugaly's quiet piano before the music settles into a brooding, off-center groove led by Ron Warburg's smeary trumpet cries. A gradual increase in depth and intensity follows until the piece crests into a crashing maelstrom. "Change" and "Homesick" build along the same lines, but with all three horns intertwining and rising until the finish. Bassist Peta Krstajic further embellishes "Homesick" with a soothing electric bass solo.

Elsewhere the soft-to-loud approach is still used but with more variation. On the Israeli folk song "Water Song," there is classical drama to Portugaly's piano, Arbel sings in Hebrew and a more up-tempo rhythm leads the tune into becoming a joyous dance. "He Sees Her" has a weightier, more soulful feel as a string quartet joins the horns and creates a pretty but heavy wave of sound that threatens to drown Arbel out. "Not Over Yet" is the most up-tempo song of the set. Arbel sings endearingly over a running piano figure and slippery percussion before the horns swarm in. She then engages in fun interplay with her band over the sparkling rhythm before Portugaly solos playfully, the bass and drums get into a bubbling funk groove and tenor player Ori Jacobson wails a hard-toned, scouring solo. Prettiest of all is the three minute miniature, "Solitude" where Arbel's voice seeps through quietly over tightly massed horns.

As a singer, Sivan Arbel has a striking voice that can effortlessly grow in volume and force. As a composer, her ability to write and pace her material over irregular rhythms is impressive but it results in most of her songs following similar arranging patterns. "Solitude" and "Water Song" are signs that she can break off from that into compelling tangents. Hopefully she continues that way in the future.

Change; Homesick; Solitude; Water song; He sees her; Omri; Not Over.