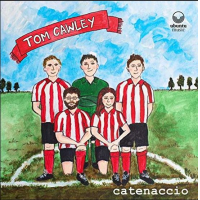 Tom Cawley has been a familiar presence on the British jazz scene for well over a decade. He teaches piano and improvisation in the jazz department of London's Royal Academy of Music and he's led his group Curios since its debut album, Hidden, was released in 2007 on Jazzizit Records. Cawley won the Young Jazz Musician of the Year award in 1998 and he's an alumnus of the National Youth Jazz Orchestra. As an in-demand pianist he's accompanied the likes of Jack DeJohnette, Gregory Porter and Prog legend Peter Gabriel.

Immediately from the start of the dynamic opener "The Ungainlies" there's a noticeable Weather Report feel to the music which continues into "Jabulani," but with the presence of Fini Bearman's lustrous vocals there's also a reminder of the first two albums by Chick Corea under the Return to Forever moniker and which memorably featured vocalist Flora Purim. Gareth Lockrane adds a vital dynamic too with his soaring flute lines. Following these two bright, airy openers, "Nutmeg" is reflective and slower-paced, morphing into a gentle samba halfway through. It's augmented by multi-layered vocals and Lockrane delivering a sultry flute solo.

The deceptively buoyant vocal beginning to "Zona Mista" gives way to some frenetic keyboard work from Cawley underpinned by the keen rhythm section. The stately "Left Peg" is sedate by comparison with the preceding track but the quirkily breathy opening to "Regista" captures the attention instantly. The short, moody "Row Z" gives way to the finale "Rabona," a lively mix of florid melody and catchy rhythms. The title of Cawley's album is an Italian word for a defensive football strategy, and the sport is also portrayed on the cover art. But it's really the music that succeeds in scoring the goals on this fine album which is replete with electro-Latin-esque charm and vibrancy.