Catching Up With Guitarist John Russell

BY JOHN EYLES
December 2, 2012
Sign in to view read count
2012 has been a memorable year for guitarist John Russell. It marked the twenty-first anniversary of his concert series Mopomoso which meets monthly at The Vortex jazz club in Dalston, London, making it the city's longest-running improvised music series. The year was also the thirtieth anniversary of Fete Quaqua, his annual festival of improv. Both Mopomoso and Fete Quaqua have an international feel, with musicians from across the globe regularly visiting them, Russell always making them very welcome. London has a considerable number of musicians who are vital in ensuring the health of its improvised music scene, notably including Steve Beresford, Evan Parker and Eddie Prevost; Russell fully deserves his place in that list.

Alongside his London-based activities, Russell regularly gigs abroad, keeping up his worldwide contacts established through Mopomoso. He also continues to regularly release albums—which brings us to these two releases that highlight his strengths as a player... 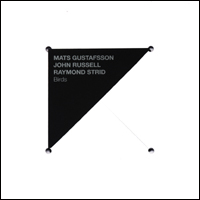 Birds was recorded in August 2011 at the Hagenfesten in Dala Floda, Sweden. The music consists of two tracks, both with titles borrowed from Tomas Bannehed's book Korparna (Weyler Förlag, 2011), hence the album title. Mats Gustafsson plays soprano and baritone saxophones with Russell on guitar and Raymond Strid on drums.

The first track, the 43-minute "The Earth As The Sun And The Ravens Are Watching," opens with the unmistakable sound of Russell's guitar, spacious and uncluttered. The restraint and taste of his playing set the tone for the entire piece; he is joined by Strid who mirrors that restraint and by Gustafsson on soprano whose playing is also uncharacteristically contained, certainly compared to the high-octane barrages of which he is capable.

While Gustafsson in full, unfettered flight can be a thrilling experience, he shows that he is not solely reliant on power to generate those thrills; his controlled contributions here, carefully considered and placed, contribute to the piece's air of tension and excitement. Throughout, it feels as if the trio could be on the verge of letting rip at any moment, and that makes for thrilling listening.

The interchanges between the three are an edge-of-seat listening experience. Tellingly, the trio is not dominated by any one instrument or player, but is a true three-way conversation in which all play an equal role; even when Gustafsson switches to his larger horn, he does not alter his approach and the mood is sustained. Together, all three steer the piece to a satisfyingly low-key conclusion.

By comparison, on the four-minute end piece "The Birds, They Fly As They Want, Don't They?" the players are rather more energised, but never sacrifice the air of control or equality. Altogether, an object lesson in effective trio improvisation. 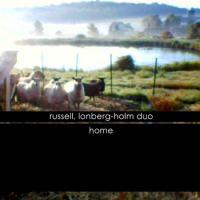 Home was recorded at Russell's home in north-east London in March 2012. It consists of four tracks ranging in duration from under five to over twenty-seven minutes; all feature the duo of Russell and Chicago's Fred Lonberg-Holm on cello, the first time the two had played together. The album title relates to more than the recording location; the track titles are all breeds of sheep and the cover photograph is of sheep on Fred's retired father's smallholding in the US; Russell himself originates from rural Romney Marsh in Kent, famous for its sheep.

Home is reminiscent of Translations (Emanem, 2011), Russell's duo with guitarist Pascal Marzan which was also recorded at Russell's home; both albums demonstrate what an exceptional duo player the guitarist is.

In each duo, Russell's playing is more energetic and obvious than in the trio. With only one other player to react to—and a string player at that—Russell responds rapidly to every phrase that Lonberg-Holm plays and vice versa, generating a full and fluid soundscape. Typically, Russell favours faster clusters of notes whereas the cellist more often opts for longer arco notes, creating a clear contrast between the two. With Russell, it is difficult to judge which is the more impressive, the speed of his brain or that of his fingers; but both have to be spot on to produce improvised music this fluid and fluent.

The longest track, "Ernsket," is an impressive tour de force with both players in full flight throughout, so that the energy level never flags. While they are distinguishable, the two instrumental lines intertwine and complement each other constantly, creating the impression of two sounds being controlled by a single mind. Clearly, Russell and Lonberg-Holm found that they had far more in common than sheep! As the guitarist comments, this was the first time the pair had played together... and hopefully not the last. This is Russell close to his best—exhilarating stuff.

Tracks: The Earth As The Sun And The Ravens Are Watching; The Birds, They Fly As They Want, Don't They?