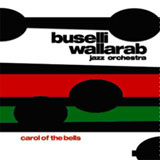 Every band that records a Christmas album faces identical challenges: find fresh approaches to familiar repertoire or think outside the box and choose songs that weren't written with the holiday in mind. While the Buselli Wallarab Jazz Orchestra sticks with traditional favorites, trombonist/arranger Brent Wallarab—who counts Duke Ellington, Sy Oliver, Billy Byers, Nelson Riddle, Billy May and Henry Mancini among his favorite arrangers—together with a top-notch group of instrumentalists and an outstanding vocalist, has produced a clear winner for Christmas jazz devotees.

The rich bass voice of Everett Greene, who invites comparison to the late Joe Williams, is generously showcased on seven of the twelve tracks. His gospel-tinged vocals, along with Luke Gillespie's Memphis-flavored piano and Mike Stricklin's soulful alto sax, keep the centuries-old "Silent Night fresh. Greene also offers a potent interpretation of "The Christmas Song and, while it won't topple the late Nat King Cole's famous version, it stands tall on its own merits. He also adds a poignant touch to the bittersweet ballad "I'll Be Home For Christmas.

The instrumentals are just as enticing. Vince Guaraldi's "Skating, written for the perennial favorite TV cartoon special A Charlie Brown Christmas, showcases soprano saxophonist Rob Dixon and clarinetist Frank Glover, in addition to strong section work by the brass and reeds. Wallarab's scoring of "O' Tannenbaum transforms his band into a subtle Count Basie-like unit, with crisp solos by trumpeter Michael Hackett and the leader himself. If there's one minor bone to pick with this CD, it is "Jingle Bells, which is a bit too derivative of Duke Ellington's famous arrangement that has appeared on a number of Christmas albums, though the soloists at least don't try to copy Duke's men.