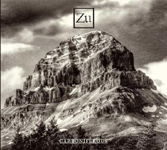 Making their high profile debut on vocalist Mike Patton's Ipecac Records, Carboniferous is the trio's fifteenth recording, preceded by a spate of releases on obscure but highly regarded independent labels. In league with their previous work, which features collaborations with Eugene Chadbourne, Mats Gustafsson, Fred Lonberg-Holm, Nobukazu Takemura, Ken Vandermark and many others, this visceral set includes a number of guests, including guitarist King Buzzo (groups The Melvins and Fantomas) and two memorable appearances from Patton himself.

Cut after a yearlong tour with Patton, this is the heaviest, most focused album of the band's career. Patton's meteoric rise to fame from the ashes of Faith No More and Mr. Bungle to avant-garde crooner with composer John Zorn, Fantomas, Tomahawk and several side-projects parallels Zu's intensive work ethic and mordant sensibility. His delirious vocal acrobatics on the surreal, prog-metal mini-epic "Soulympics" and unearthly overtone singing on the atmospheric "Orc" are the album's most unorthodox performances, providing welcome respite to the session's bone-crushing intensity.

While the endless barrage of off-kilter time signatures, punishing rhythms and extreme volume often lacks dynamic variety upon repeated listens, when enjoyed incrementally the set possesses its share of visceral charms. Regardless of genre, the testosterone fueled Carboniferous is bound to be one of the heaviest, most uncompromising records of the year.