By Karl Ackermann
January 13, 2017
Sign in to view read count 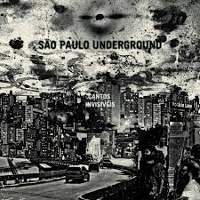 In the spring of 2015 Rob Mazurek's São Paulo Underground expanded their touring formation and added "Black Cube SP" to their name for a tour that briefly made stops in the U.S. The enlarged group featured the addition of Thomas Rohrer on rabeca, a Brazilian viola. Rohrer, a Swiss native transplanted in Brazil was part of Mazurek's sextet on Return the Tides: Ascension Suite and Holy Ghost (Cuneiform Records, 2014) but had not yet been fully introduced to U.S. market audiences. On Cantos Invisíveis Rohrer returns in a pivotal multi-instrumental role.

Rohrer is not alone in multi-tasking on the album. All members of SPU manage at least five instruments in the course of the nine original compositions. Mazurek owns or shares the writing credits on seven and percussionist (primarily) Mauricio Takara contributes two individual pieces. A full half-hour of the sixty-one minute album is consumed in the long, involved, opening and closing pieces.

With the opening "Estrada Para o Oeste," we hear SPU in one of their most enjoyable modes—that of skewed Brazilian influences filtered through an array of instruments, effects and voices and a mind-boggling density of sound. Takara's cavaquinho (a small Portuguese guitar instrument) and Rohrer's rabeca (a Brazilian variation of the viola) add an exotic and shadowy feel to "Cambodian Street Carnival." "Lost Corners Boogie" is the most fusion oriented piece on Cantos Invisíveis with its electronics eventually falling into a ruptured rhythm. There is a repetitive tribal atmosphere in the satisfying "Olhaluai" flowing beautifully into the melodic "Of Golden Summer." The sixteen-plus minute closer "Falling Down From the Sky Like Some Damned Ghost" takes its time in building, swept up in a flurry of synth effects until Mazurek's ethereal cornet delicately closes the piece.

Cantos Invisíveis has all the intangible qualities that have become the hallmark of Mazurek's work. Approachable even its occasional lack of identifiable markers, there is a warmth in the midst of incomparable musical acrobatics. The spirituality in Mazurek's work is deeply personal and his ability to share the same with his audience has been his unparalleled contribution to music.