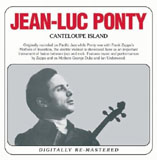 Originally released in 1976, Blue Note's Canteloupe Island brought The Jean-Luc Ponty Experience with The George Duke Trio (Pacific Jazz, 1969) and King Kong: Jean-Luc Ponty Plays the Music of Frank Zappa (Blue Note, 1970) together as a two-album set. Long out-of-print, BGO's remastered reissue contextualizes the French violinist's later work. He may have dived deep into the fusion pool with albums including Aurora (Atlantic, 1975) and Imaginary Voyage (Atlantic, 1976), and explored African rhythms with Tchokola (Epic, 1991), but Cantaloupe Island is a reminder that Ponty was equally capable as both an experimental and straight-ahead player.

King Kong was a collaboration between Ponty and the late Frank Zappa. The guitarist's interest in everything from satirical rock to "musique concrete" had already been established on albums including The Mothers of Invention's Freak Out! (Ryko, 1966) and his own Lumpy Gravy (Ryko, 1967). Though Ponty's earlier releases were straight-ahead affairs, here he proved a flexible foil for Zappa, who wrote all but one of its six pieces.

Three of Zappa's compositions had already appeared on Mothers of Invention records, while one—the surprisingly balladic "Twenty Small Cigars—would show up soon after King Kong's release on Chunga's Revenge (Ryko, 1970). Ponty—with a shifting line-up where the only other constant was pianist George Duke—helped establish Zappa credibility as a jazzer, something already known by the West Coast jazz community. The title track's fast waltz and quirky melody open up to a hard-swinging middle section featuring strong solos from Duke and Ponty, while Zappa takes a guest turn on Ponty's modal "How Would You Like to Have a Head Like That" with a visceral solo that presages his own Hot Rats (Ryko, 1969).

But the centerpiece of King Kong is the nearly twenty-minute classical-form-meets-mainstream-improvisational-abandon of "Music for Electric Violin and Low Budget Orchestra." Ponty would go on to work with fusion icon John McLaughlin's expanded Mahavishnu Orchestra, but here he makes it clear that he's as conversant with defined form as he is open-ended freedom.

The Jean-Luc Ponty Experience, also features Duke, but with regular trio mates, bassist John Heard and drummer Dick Berk, and is a looser live recording that's a mix of two originals—Duke's open-ended "Foosh" and Ponty's relaxed swinger "Contact"— alongside a suitably funky take on Herbie Hancock's "Cantaloupe Island" and obscurer pieces by German pianist Wolfgang Dauner (the ethereal ballad "Pamukkale") and Jean-Bernard Eisinger (the fiery "Starlight, Starbright"). In all cases Duke and Ponty are given the opportunity to stretch out, with Ponty delivering a series of high velocity solos that may surprise those only familiar with his later efforts.

Ponty's career has been defined by diversity, with The Acatama Experience (Koch, 2007) his best album in recent years. Canteloupe Island possesses some of his most incendiary playing on record, and will come as a welcome return to availability for fans familiar with its strengths and a pleasant surprise for those new to its charms.