By JOHN KELMAN
September 2, 2008
Sign in to view read count 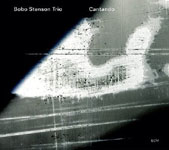 While Bobo Stenson's last record, Goodbye (ECM, 2005), was a fine addition to the Swedish pianist's small but significant discography, it was also something of a transitional record. Drummer Jon Christensen—an essential member of Stenson's trio for decades, appearing on all four of the pianist's previous releases as a leader on ECM from Underwear (1971) through to the high watermark of Serenity (2000)—was gone. The legendary Paul Motian filled the drum chair for Goodbye, bringing a very different kind of textural approach to the date, but his busy schedule and inability to tour made it a record about instantaneous chemistry, rather than the kind that evolves from playing together extensively.

Cantando continues Stenson's twenty-year relationship with Anders Jormin. A virtuosic player with remarkable extended techniques, his relationship with Stenson has always been that of an equal—his singing double-bass as much a factor in defining the trio's unique complexion as Stenson's own ability to bring unerring lyricism to even the most open-ended context. Jormin has also been responsible for introducing compelling material, including that of Cuban singer/composer Silvio Rodriguez, whose "Olivia" opens Cantando with the perfect combination of melodic resonance and liberal interpretation. Like Stenson, Jormin never loses sight of the essence of the material, but he approaches it with pliant unpredictability—often teetering on the edge of a precipice, but with enough counterbalance to ensure neither he nor Stenson ever tumble headlong into it.

What makes Cantando another milestone like Serenity is the introduction of Jon Fält, a young drummer who has been playing with Stenson for the past few years but who makes his ECM debut here. Still shy of 30, Fält's no less a colorist than Motian or Christensen, but he brings a refreshing directness to the music. Capable of sublime implication on the two haunting versions of Czech composer Petr Eben's "Song Of Ruth," he balances delicate touch with greater assertion on Jormin's more outgoing "Wooden Church" while bringing nuanced pulse to the bassist's equally thematic "M." He may lack the benefit of Stenson and Jormin's many years together, but the profound chemistry is undeniable as he brings new energy to the trio, encouraging his trio mates to play with a vitality not heard since War Orphans (ECM, 1998), even as they all approach the music with more thoughtful abandon.

The choice of material ranges from Ornette Coleman's rarely covered "A Fixed Goal" to an extemporaneous look at classical composer Alban Berg's dark-hued "Liebesode." But "Pages" is Cantando's most revealing track. A fourteen-minute spontaneous composition, itself culled from four separate improvs pieced together by producer Manfred Eicher, it demonstrates just how organically Stenson, Jormin and Fält can pull form out of the ether. It's the first time Stenson has included such an extended free piece on record, making Cantando one of the pianist's best by building on past accomplishments while demonstrating newfound potential, greater diversity and unforeseen energy.