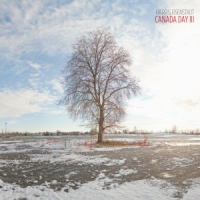 Harris Eisenstadt's Canada Day quintet is evidence that an ensemble can be both disciplined and chaotic. With Canada Day III, the drummer/composer presents eight original pieces that, but for his talented sidemen, probably could not exist elsewhere.

As with his previous quintet dates, Canada Day (Clean Feed, 2009) and Canada Day II (Songlines, 2011) Eisenstadt's quintet remains the same except for bassist Eivind Opsvik, replaced here by Garth Stevenson. Although the drummer claims not to write tunes for individual players and their styles, there is no mistaking the unique-sounding Nate Wooley. Part perfect chamber player and part slurry growling free jazz trumpeter, his dialogue with saxophonist Matt Bauder throughout is wondrous. Eisenstadt, a student of non-Western percussion, is a fan of shifting time signatures and the occasional slight of hand. On "The Magician of Lublin" he contrasts a Stevenson's walking bass line with the muted hum of Wooley before changing tempos, and a quicksilver duet with Bauder. Elsewhere, he mixes a rocking mentality into his own slamming (and unsystematic) solo on "A Whole New Amount of Interactivity," before the quintet unravels into some free playing. Their Freedom, though, is not without responsibility to the compositions.

The indirect swing of "Song for Sara," for his wife (bassoonist Sara Schoenbeck), is colored by the steady hand of Chris Dingman, a player that forgoes speed for a sort of permeating sound. On the funky "Nosey Parker," the vibraphonist plays with a bouncing snatched sound, as Wooley cuts free with a gnashing slurry garble of notes that gets a formal and genteel response from Bauder that invites Wooley to make nice. Eisenstadt loves to line up the beauty and the beast in the same tune. His waltz that morphs into a march, "Shuttle off this Mortal Coil," that is infused with some of Miles Davis "Fast Track" sounds. The composed music is executed here with a non sequitur freedom that defies logic, but it continues to work just fine.

Slow and Steady ; Settled; A Whole New Amount of Interactivity; The Magician of Lublin; Song for Sara; Nosey Parker; Shuttle off this Mortal Coil; King of the Kutiriba.