BY BRUCE LINDSAY
January 2, 2012
Sign in to view read count 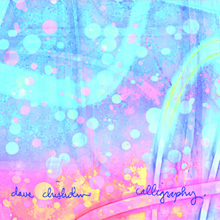 Trumpeter, composer and comic book writer Dave Chisholm made a confident recording debut with Radioactive (Self Produced, 2010), a big band album featuring five of his original tunes. On Calligraphy he takes a different approach, performing another set of originals in a quintet setting. Along with this paring-down of the ensemble, Chisholm's writing makes even more use of space and a "slow burn" approach to the development of mood and tension.

Chisholm's trumpet tone is breathy and warm, his style emphasizing feeling rather than displays of speed or flurries of notes, an approach that brings him closer in style to European players like Verneri Pohjola and Julian Wasserfuhr, although Miles Davis' influence is also clearly discernible. His compositions draw inspiration from bands such as Mogwai and Godspeed You! Black Emperor, as well as jazz stylists like Davis: a varied set of inspirations that Chisholm channels effectively in his writing and performance.

The opening "A Fitting Combination" gets things off to a rather dark, mysterious start thanks to Noah Berman's almost Tony Iommi-like guitar riff. Berman's contribution is also crucial to the mood of "Plant A Seed" and "Aeroplanes," but this time it's much more of a post-rock mood, languid and relaxed rather than heavy. "Calligraphy" builds tension very slowly, the quintet showing superb control on a number that has a particular affinity with another Chisholm favorite, the Icelandic band, Sigur Rós.

Chisholm overdubs glockenspiel, acoustic guitar, trumpet and wordless vocal on "Whisper," a tune that stands apart from the others sonically by virtue of this unique mix of instrumentation. There's an almost childlike innocence to the tune, a striking contrast with the drama and dynamism of the other tracks. The trumpeter opens "C-Minor" with a breathy, laidback, almost lazy tone but soon opens out, shifting to a much brighter, more metallic tone. By the end of this dramatic, sweeping composition the band has built up a powerful sound that belies the fact that only five musicians are involved.

Calligraphy demonstrates Chisholm's ability to compose for and lead a small combo, just as Radioactive showcased his skills with a big band. He's still young and still studying (at the Eastman School of Music), but his artistry is already impressive.