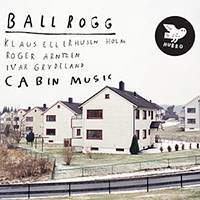 If 2010's Insomnia (2010) was a significant shift away from the more decided jazz outlook of Ballrogg's self-titled 2008 debut (both on the Bolage imprint), then with Cabin Music, the departure is complete. In The Country bassist Roger Arntzen formed Ballrogg with saxophonist/clarinetist Klaus Ellerhusen Holm in 2006, and six years later the duo is now a trio, with the addition of Ivar Grydeland—guitarist, banjoist and overall employer of anything with steel strings in groups including drone-meisters Huntsville, last heard on For Flowers, Cars and Merry Wars (Hubro, 2011), and the generally quieter and even more abstract Dan Les Arbres, whose 2010 self-titled ECM debut has been recently followed up with Canopée (ECM, 2012).

If Insomnia's departure for environs more closely affiliated with contemporary classicism made it a more abstruse listen, Swedish Country—while no less left-of-center—instead aims for a sound that's more eminently accessible; an approach that connects Huntsville's drone-centric ambience to strong suggestions of minimalist behavior, in particular Philip Glass, whose arpeggio-driven music so defines iconic works like the soundtrack to Koyaanisqatsi (Nonesuch, 1982), and Steve Reich,whose pulse-driven music on albums like You Are (Variations) (Nonesuch, 2005) are somewhat less relentless.

Compared to Glass and Riech, Ballrogg's approach is far less insistent. The hypnotic stasis at the beginning of "Breakfast Music"—where Arntzen's bowed bass, Holm's electronics and Grydeland's radio are punctuated gently by the guitarist's spare pedal steel swells and lines—gradually shifts to a middle section that, with Arntzen's gradually emerging heartbeat and a simple unison melody from Holm's bass clarinet and Grydeland's guitar, suddenly turns to a Glass-like passage, with Holm's more persistent arpeggio and Arntzen's thrumming pulse shifting the complexion of the tune. But as much as form defines its overall roadmap—and this is the case with the entire record—there's also plenty of room for extemporization, though never in the classic mode of delineated features. Instead, instruments move back and forth in the mix—more about texture than overt theme, although the playing is, oftentimes, lovingly simple, lyrical and folkloric.

Unlike the group's previous discs, which featured a larger number of shorter pieces, and a move to original music, predominantly from Holm, but with Arntzen also contributing, Cabin Music consists of just four longer pieces, with three of them (including "Breakfast Music") in the eight-minute range. Only "Sliding Doors" is longer, but if the overall texture of this 10-minute piece is different, thanks to Grydeland's switch to banjo, its similar allegiance to Ballrogg's curious blend of minimalist structures and improvisational expansions help give Cabin Music its voice and specific personality.

The music, this time, is all written by Holm; but if that, in and of itself, signifies its own directional shift, the impact of Grydeland's recruitment is clearly an equal partner in Ballrogg's sudden and, perhaps, unexpected change of paradigm. With Arntzen the ever-present rock that anchors the group, Cabin Music is Ballrogg's best and (without compromise) most appealing record yet, and bodes well for future installments.