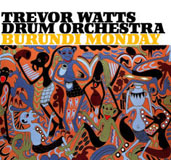 American listeners may know Trevor Watts as an accomplished alto/soprano saxophonist, but more likely they will associate him with the British avant-garde.

Now in his late sixties, Watts logged a lot of time with blues, rock and traditional jazz bands before joining drummer John Stevens in 1965 to form the Spontaneous Music Ensemble (SME), a collective that provided a launching pad for many visionary British free improvisers—from Watts to Dave Holland, Kenny Wheeler, Derek Bailey and Barry Guy.

Burundi Monday, recorded live in 1983 by the Trevor Watts Drum Orchestra (put together in the 1980s) presents to our more contemporary ears a fresh, exciting and focused example of mostly improvised music. The two tracks ("Burundi Monday clocking in at near thirty-five minutes and "Double Up just under half that length) reveal the huge difference in approach between the Drum Orchestra's layering of a groove foundation and the more illustrious, unpredictable SME.

Here we hear a side of Watts' playing and listening skills that might not have been so evident elsewhere. There's more of his background in traditional jazz and blues as well as the obvious penchant for African music: far from a simple appropriation of stylistic affectations, it's heartfelt music played with deep musical skill, yet open to spontaneity.

The players are outstanding, including surprises in violinist Peter Knight (known more for his work in the British trad-folk-rock band Steeleye Span) and drummer Liam Genockey (also more from the rock world). Both contribute wonderfully to the total concept with a special melodic interplay.