BY EYAL HAREUVENI
January 27, 2014
Sign in to view read count 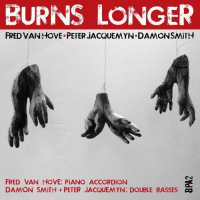 The three dense and conversational improvisations were recorded in L'Archiduc art gallery in Brussels on Easter Sunday, 2008. The date of the recording may have inspired Van Hove to introduce bluesy-church-like resonance to the piano, mainly on the first 27-minutes of improvisation. Smith (mixed intro the the right channel) and Jacquemyn (on the left channel) solidify the flowing energetic and intense approach with highly physical playing, both with the bow and pizzicato, enjoying to contrast and challenge each other.

The second, 10-minute improvisation, is a relaxed interlude compared to the first or the the last improvisation. The third one, a wild tough slow burning 35-minute sonic journey led by Van Hove with eccentric accordion playing and later on the piano and Jacquemyn, who adds overtones and growls, with Smith intensifying this associative and super fast interplay with masterful, extensive usage of extended techniques and continuous madcap energy. This improvisation brings to mind the early FMP label albums that were the first ones to introduced similar, tough and uncompromising approach to free improvisation.