BY GLENN ASTARITA
November 26, 2012
Sign in to view read count 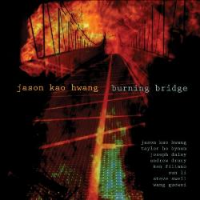 Featuring the members of his quartet EDGE, violinist Jason Kao Hwang slashes through preconceived perimeters and bridges a cultural gap via his thoroughly modern vision on this concentrated effort, sparking innovation from a 360-degree stance. The complex premise for these intersecting works emanates from the passing of his mother, his Chinese heritage and life's experiences, all amalgamated into an album that breathes life anew.

Dissonance and unorthodox phrasings opaquely coalesce with Hwang's thick staccato phrasings and sophisticated risk-taking approach, where solemn strings and horns passages segue into avant-like expansionism. The moving parts ring in an air of anticipation amid drawling choruses, semi-structured detours and oriental overtones, largely due to Wang Guowei's use of the erhu, a Chinese bowed, two-stringed instrument. This musical facet is complemented by Sun Li's four-stringed pipa performances, resulting in an ensemble that portrays a world without borders. Timber and episodic theme-building are sometimes offset by Ken Filiano's arcing bass lines, as the band occasionally executes its course with bottom-up engineering mechanisms. And various movements are punctuated with jazzy blues motifs and other patterns that denote a medium-tempo roller coaster ride.

"Worship, Whirling" surfaces as a feverish religious ceremony of sorts as drummer Andrew Drury bashes his kit early on, perhaps exorcising the demons, followed by lissome interludes and sounds of the Orient. Here, a sense of wonderment prevails, but trombonist Steve Swell elevates the pitch with his brash and wily solo, establishing a new path for the soloists' fluid developments, teeming with congenial mayhem, pathos, and melodic undertones. The band often shifts the tide and toggles between introspective panoramas, off-center cadences and emotive free flights. Hwang also injects the microtonal component into the mix to produce a vibe based on self-interrogation.

The program boasts a procession of cutting-edge frameworks, abetted by Hwang's trickling and angular voicings, with tubaist Joseph Daley frequently injecting massive doses of power into key spots through his passionate dialogues with the frontline. Burning Bridge is a monumental endeavor, foretelling that often unattainable synchronization within modern era avant-garde vistas where calamity, harmonious accord, and mind-altering improvisation seem to be in alignment with the heavens.