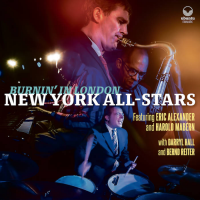 Who would have thought that in this day and age a contemporary hard-bop / post-bop live CD could sound so good? Recorded live at London's Pizza Express Jazz Club on 20th and 21st November 2017 this little gem qualifies as a winner for the sheer visceral excitement conjured-up by its four participants. Senior partner in the band is veteran pianist Harold Mabern, registering a sprightly 81 years at the time of recording, whose playing here is absolutely incandescent. His former pupil, tenorist Eric Alexander cooks-up smoking, full-bodied saxophone throughout. Bassist Darryl Hall (not to be confused with Daryl Hall the rock musician) and Austrian born Bernd Reiter on drums complete the line-up and provide truly excellent accompaniment.

The set kicks-off with a rousing, memorable version of Frederick Loewe's "Almost Like Being In Love" and is immediately followed by Loewe's hit from My Fair Lady "I Could Have Danced All Night," taken at a satisfyingly frenetic pace. However, things take an even more exhilarating turn with Mabern's original composition "Nightlife In Tokyo," the minor chord structure providing a perfect backdrop for Alexander's biting tenor.

The sixties pop tune "The Night Has A Thousand Eyes" is given a fresh re-working and remains in the listener's memory far longer than would have been thought imaginable. Another highlight is an energised and cliché-eschewing version of George Gershwin's "Summertime" in which Alexander manages to insert some quotes from "A Love Supreme." This fast-paced interpretation may well be one of the most original versions of that standard ever recorded, with the All-Stars channelling the sound of the classic Coltrane quartet, at times . The New York All-Stars confound all expectations and clearly demonstrate that this kind of jazz, which is very much alive, can really burn through any barriers. Hence the wholly accurate title.

About The New York All-Stars