BY ANTHONY SHAW
December 7, 2014
Sign in to view read count 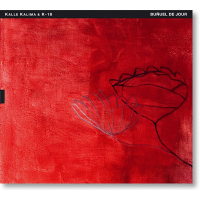 This third album featuring K-18's original line-up doesn't stray very far from the content of the previous two. But in combination with vaguely remembered images from Buñuel's films the music readily transports the listener to far corners of the aural universe with its exotic and compelling mixtures of timbre and intensity. The players are all masters of the exceptional and the unexpected and along with the sumptuous packaging, featuring on the cover and inside TUM's standard selected piece of Finnish artwork (this time by Leena Luostarinen), this album is another ticket to the strange auditory world of Berlin based composer Kalle Kalima. This time the themes of all pieces are taken from the visual world of the iconic Spanish director, Luis Buñuel.

Similar in dynamics to the earlier albums, this contains maybe more archetypal themes, where scrunchy low guitar and obtuse sax or clarinet lines undercut by haunting discordant accordion. Again similar varieties of crescendo, dissonance and weirdness push the boundaries of indulgence. Key in this respect, Mikko Innanen has made something of a name for himself in Europe as a purveyor of bizaare saxophony which is easily transferable to Kalima's off the wall compositions.

This is not to say that many pieces are lacking in melody or harmonic feel. Some evoke a distinctly meditative feeling, such as El Padre, a reference to Buñuel's own appearances in his films as a priest, as well as possible motifs of Charles Mingus and Eric Dolphy. The references to the films are not intended to be categorical, and Kalima's writing in the copious liner notes explains that it is often just a mood that the film conveys which he is trying to interpret auditorially.

In accordance with the variety of Buñuel's work, and in comparison to Kalima's earlier Kubrick-and Lynch-inspired albums, as a whole this is more low key, even delicate at times. Belle de Jour has a particularly dreamy feel, with Innanen's sax played very sotto over Hauta-Aho's minimalistic bass and Kujala's ephemeral micro-toned accordion. There is as much variety here as Buñuel's own work, and enough to keep the listener dazed and intrigued.

The Phantom of Liberty; The Milky Way, El Padre; Los Olvidados; Belle de Jour; Diary of a Chambermaid; The Discreet Charm of the Bourgeoisie; Tristana; Simon of the Desert; That Obscure Object of Desire; An Andalusian Dog;Viridiana.