By BUDD KOPMAN
January 3, 2008
Sign in to view read count 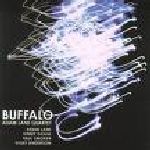 Buffalo, by bassist Adam Lane and his trio (Vinny Golia on tenor and soprano sax and drummer Vijay Anderson), represents the completion of a triptych taking place over two days in February, 2005. This live recording, on which trumpeter Paul Smoker sits in, is an example of the power that music can have when everything just clicks.

Zero Degree Music (CIMP, 2005) and Music Degree Zero (CIMP, 2006) are the two studio recordings done on the 24th and 25th of February as the band was completing a short tour. The guys were very hot, ready to play and both releases got very high praise.

Buffalo was recorded on the night of the 25th and the heat of the sessions has turned into smoke and fire at the gig. All but one of the tunes had been recorded in the studio and this set just flattened the wildly appreciative audience.

Lane is an extremely strong bassist who channels enormous amounts of energy into every note that he plucks or bows. Everything he does is under control, even when it sounds near the edge of chaos. The tunes presented here usually center around a Lane vamp or rhythm, which is picked up and amplified by the tight and supple drumming of Anderson. Golia and Smoker are then free to blow over this cauldron. The collision of free playing, static harmony and muscular vamps produces heat that is mesmerizing.

Two of the tracks break sixteen minutes and one other is a hair under fifteen, but there is not a second of flab. The music moves forward organically, having sections that pull back to take a breath, with Anderson expertly following Lane's lead, only to rise again to greater heights.

Golia follows every nuance of the proceedings and is masterful on both tenor and soprano saxophones; wailing free, spitting harmonics, but then dropping into time over a walking bass when the moment is right. Smoker sounds like he has been playing this music forever, fitting right in beside Golia with a pungent sound that blends remarkably well. The group sounds like a single unit. but with all four members maintaining their identity. Lane leads, but the others do not merely follow.

Live recordings, when well done, have immediacy and impact which is the jazz experience. Buffalo has this in spades and would make an ideal introduction to the freer side of jazz, since it is anchored in strong rhythms and memorable vamps. Together with the two studio recordings it is a document of a time, as Cadence's Bob Rusch has said of these recordings, "...as if no wrong could be done. ... Believe what you hear.

Spin with the EARth; Without Being; Free; In Our Time; Lucia's First Breath (Intonations for February 14).