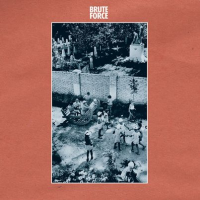 Faithful to its name, the young Norwegian noise-improv trio Brute Force is determined to make its point loud—loudest by any standard—and clear. This trio's brutal sonic raison d'être derives its reckless power from negation of improvisational forms in jazz and rock, the classic trio format, and even daily life in peaceful Norway. Revolt is the essence.

Surprisingly, this trio—guitarist Karl Haugland Bjorå, bassist Egil Kalman and drummer Ole Mofjell—began to work as an acoustic trio (guitar, double bass and drums) but didn't find its sound until Kalman brought his electric bass and some chains. Then the fun began and the trio's identity was established.

The self-titled debut with its single 28-minute title piece was recorded during an open day, where the audience could come and watch the recording session. Brute Force do not attempt to be anything but a raw, dirty and colossal gush of energy. This massive flow of energy threatens to surrender any second to its own manic attacks. And there are few fleeting segments where the trio sounds at a loss in in front of its own heavy walls of noise, searching for ways to force its way through it. But just then, in these less chaotic and extreme passages, the trio regains its power for another merciless onslaught, revolting until the explosive coda.

Obviously, not for faint of heart, but radicals, adventure-seekers, extreme sport addicts and others who enjoy the thorny edges may sympathize with this intense ride. Noise master Lasse Marhaug designed the disturbing cover.