By JOHN KELMAN
November 4, 2006
Sign in to view read count 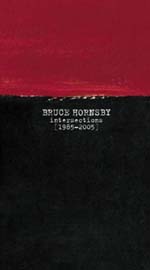 One often wonders what path an artist might have taken had he or she made different creative choices. While it would be presumptuous to compare the two in terms of sheer impact, it's certainly a possibility that had Keith Jarrett chosen to pursue a career as a pop singer/songwriter he may well have sounded like Bruce Hornsby. Certainly Hornsby's debt to Jarrett is acknowledged and self-evident, even on out-and-out pop tunes like his first mega-hit, "The Way It Is."

For those who had either grown tired of or had never like the synth pop bands of the 1980s, the emergence of Bruce Hornsby and the Range was a serious breath of fresh air. When the piano-driven "The Way It Is" first showed up on radio and MTV, heavy rotation it proved that strong musicianship could still be the foundation of good pop.

Sure, drummer John Molo's drum triggers were and remain cheesy to this day, and the soft synth washes demonstrated that Hornsby wasn't totally immune to the sounds going on around him. But all one had to hear was one piano solo to know this was someone who had done some serious wood-shedding. And anyone who saw Hornsby and the Range live knew that this was not a band to simply regurgitate material from the records verbatim; this was a band that took liberties. Not since Mark Knopfler emerged as the new guitar god with Dire Straits had an artist come along whose references were broad, but who also had a clear ear for memorable melodies that put him high on the pop charts.

The lifespan of The Range was inherently limited, but Hornsby has continued to release albums under his own name since disbanding the group in the early 1990s. He's never captured the same kind of market share as he did with his early albums, but he's remained busy with his own projects and as a guest with others. While he continues to perform early hits like "Mandolin Rain," "The Valley Road" and "Look Out Any Window" to this day, he's by no means resting on his laurels, morphing those early pop-productions into everything from bluegrass to solo piano excursions to slinky funk.

Better than any single Hornsby album could, the four-CD/one-DVD box set Intersections [1985-2005] shows what he's capable of. Playing with everyone from The Range to The Grateful Dead, guitarist/vocalist Bonnie Raitt, guitar icon Pat Metheny and saxophonists Branford Marsalis and Ornette Coleman, it's a set that's sure to surprise even those who feel they know all there is to know about Hornsby.

The box is broken into three categories: "Top 90 Time," "Solo Piano, Tribute Records, Country-Bluegrass, Movie Scores," and "By Request (Favorites and Best Songs)." With a full third of the music previously unreleased, and another good chunk from single "B" sides and aforementioned tributes and soundtracks, even the most committed Hornsby fan will find a wealth of new material.

The real surprise is that rather than provide a "greatest hits" package of original versions, while virtually every popular Hornsby tune is represented somewhere in the box the majority are in significantly altered forms that show just how malleable his material is and how loose he can be. Three different versions of "The Valley Road" are a good example. A live 2005 version with his recent (and very, very hot) touring band is a greasy piece of bluesy funk; the second, a foot-stomping bluegrass version in collaboration with The Nitty Gritty Dirt Band; and the third a loose and sloppy but totally grooving boogie take with The Grateful Dead.

The comparisons to Jarrett aren't totally out of left field when one considers Hornsby's solo versions of "The Way It Is," "Look Out Any Window" and "Night On The Town." In every case the songs have been twisted in so many ways as to be almost unrecognizable. Even when the familiar lyrics appear, Hornsby's vocal approach to phrasing is as extemporaneous as his pianism. He's clearly a player with an encyclopedic musical knowledge and voracious musical appetite, with references that range from classical to jazz and more. And while he's undeniably a virtuoso, the song always comes first—even if it's being re-imagined every time he plays it. His language may, most often, say pop—but his execution and aesthetic just as often say jazz.

In fact, it appears that the only time Hornsby resorts to including original album versions of hit tunes is when he honestly feels that they're the definitive ones. And that's rarely the case. His continual reinvention of his own material—and wonderful ability to place it in medleys that seamlessly mix in material by others including Sam Phillips, The Band and Pink Floyd—makes the set revealing and unexpectedly exciting.

When Hornsby pays direct due to Jarrett, as he did when he participated on the tribute album As Long As You're Living Yours: The Music of Keith Jarrett (RCA, 2000), he applies the same open-mindedness that Jarrett does when interpreting the music of others. "Backhand," originally released on Backhand (Impulse!, 1974) with Jarrett's American Quartet, is given a New Orleans second-line make-over with six-piece horn section and Theodore "Bo" Dollis' gritty vocals. Hornsby's take on Elton John's "Madman Across The Water," on the other hand, comes as much from the modality of McCoy Tyner as it does any pop reference. His duet with Ornette Coleman on Coleman's own "Hop, Skip And Jump" finds surprising middle-ground, with Hornsby sounding freer than he's ever been.

For anyone who hasn't had the opportunity to hear Hornsby in concert, a number of recent live performances shine, notably a medley of his own up-tempo "Spider Fingers" with Bud Powell's "Tempus Fugit," and another medley that works its way from Hornsby's "King Of The Hill" to Bill Evans' "Twelve Tone Tune" and, finally, Sam Phillips' "Mystery Train." What might be non sequiturs to some make total sense to Hornsby.

The DVD is a mixed bag. The first half brings together all Hornsby's music videos and, while they're entertaining enough—including three directorial spots by Spike Lee—he's no Peter Gabriel. But the second half of the disc makes up for the datedness of the videos with a number of live performances from The Grateful Dead, Hornsby touring groups and special one-time events. Hearing Hornsby perform not just his own material but Dylan, The Dead, Lennon and Pink Floyd, one has to marvel at his sheer persistence and ability to accept with equanimity that his days at the top of the charts may be gone, but his musical breadth still permits him a full and fruitful career.

Hornsby's clearly a player with an ego that can handle the ups and downs of the pop world—something that's in clear contrast with Roger Waters' shameless and embarrassing stage antics during the 1991 Legends of the Guitar Festival performance of "Comfortably Numb." Hornsby is there to play. Waters is there to preen.

Since Hornsby hasn't had much in the way of a radio hit in years, there are understandably those who wonder if he's migrated to the "where are they now" category. Intersections [1985-2005] is proof that he's never gone away and, based on the recent live tracks, is playing better than ever.

Tracks: The Way It Is; Mandolin Rain; The Valley Road; Jacob's Ladder; Nobody Here But Me; The End Of The Innocence; Look Out Any Window; Across The River; Lost Soul; Fields Of Gray/That's Where It's At; Walk In The Sun; Gonna Be Some Changes Made; Dreamland.

Tracks: Videos: The Way It Is; The Valley Road; Look Out Any Window; Defenders Of The Flag; Across the River; Talk Of The Town; Fields Of Gray; Walk In The Sun; Swing Street; Go Back To Your Woods; Barcelona Mona; Love Me Still. Live Performances: The Valley Road; The Mighty Quinn (with B.B. King, Lou Reed, Jeff "Skunk" Baxter); They Love Each Other (with the Grateful Dead); Comfortably Numb (1991 Legends of the Guitar Festival with Roger Waters); Imagine; Another Day; The Tide Will Rise (with Bonnie Raitt and Pat Metheny); Talk Of The Town; Star-Spangled Banner (Game 5, 1997 World Series with Branford Marsalis); Gonna Be Some Changes Made; Candy Mountain Run.