Sunday, October 25, became a memorable day at the Douglas Beach House (aka Bach Dancing and Dynamite Society) when the Brubeck Brothers Quartet Quartet arrived on stage with Chris Brubeck on electric bass and trombone, Dan Brubeck on drums, Mike DeMicco on guitar and Chuck Lamb on piano. As the audience gathered, some wondered whether their father Dave Brubeck might make an appearance. Chris Brubeck humorously nipped that hope in the bud from the very beginning of the concert, making it appear as though this expectation is common whenever the Brubeck brothers gather. 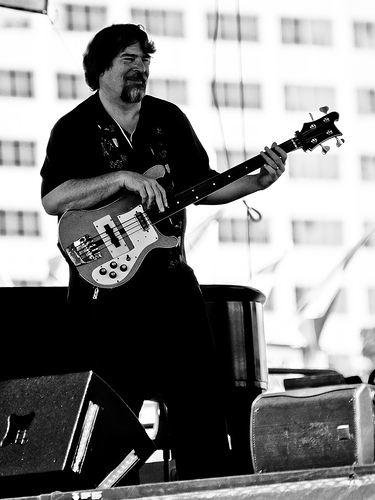 With their opening tune "West of One," written by guitarist Mike DeMicco and recorded on their album Intuition, the quartet proved one of the tightest to appear at the Beach House in a long time. The musicians knew their music: it had become a part of them, as was further attested when they did not use sheet music. (One exception occurred in their second set, and it showed.) Chris plays his bass in a unique style. Normally, the audience sees the bass tucked away in the back of the band. Rarely is it at the head of the stage, leading the way through the number, but that's how it was positioned. As the pace quickened, Chris turned to his pianist Chuck Lamb, and the two of them played off of one another, smiling back and forth, each appreciating what the other was doing.

From their album Classified (Koch International, 2008) they played "Dance of the Shadows." The tune began oddly, as though no one was playing from the same page. Dan Brubeck, on the drums, came in intermittently, hitting hard and drowning out the rest of the group. However, that imbalance didn't last long, as Chuck Lamb brought it all together with a Latin melody. He and guitarist DeMicco fused and laid down a Brazilian sound while the two Brubeck brothers tastefully followed. The ensemble launched into a high-energy, rapid phase of the piece and then came down soft and smooth. These four musicians are not only expressive but also impressive individually and collectively.

The band showed a special skill for taking their audience through laid-back mellow passages, then suddenly launching into high intensity music. Their tunes are varied; consequently, the listener does not feel as though each successive number is simply a modification of something already heard. This programming keeps listeners anticipating what might come next, drawing them into the heart of the music. For instance, in "Cool on the Coast" by Chuck Lamb, the pianist began with a tender solo, but as soon as this part had established itself, he quickened the pace, the other band members sliding into the piece and urging the intensity even higher but with the piano now accenting the guitar's harmony. Finally, near the end of the piece, with everyone still playing, Lamb broke from playing the keyboard, stroked the piano strings, and suddenly there was silence. It was completely unexpected.

The rewards are ample when attending a performance by the Brubeck Brothers Quartet. It feels as though this group not only enjoys playing together but that they are a perfect match in their complementing of each other. Listeners of their album Classified will appreciate this special empathy, as most of the concert was based on this release. When all had been said and done, the audience rose to its feet and gave extended applause. No doubt, most assumed they would do an encore, but they left the stage.