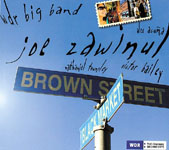 The fusion supergroup Weather Report's hit "Birdland" may have been covered by big bands before, but the majority of the extensive repertoire created during its 1971-86 run has remained largely untouched. Given founding member Joe Zawinul's innovative orchestrations on primitive analogue synthesizers, it's surprising more large ensembles haven't taken advantage of his ready-made arrangements.

Until now. Teaming with arranger Vince Mendoza, Brown Street represents the first time Zawinul has taken a concerted look back, and it's an exciting one.

Critics of Weather Report often point to the arguably dated and "cheesy" synth sounds. Brown Street proves that, when one peels away the production values of the time, the material remains remarkably timeless and adaptable to any context.

Recorded live at Zawinul's Vienna club Joe Zawinul's Birdland in late 2005, this double disc set might appear on the surface to be less of a challenge to Mendoza than other projects with artists including Joni Mitchell, Björk and the Brecker Brothers. But taking Zawinul's original orchestrations and spreading them out across the pliable fifteen-piece WDR Big Band Köln (with whom Mendoza has been working for many years) is, perhaps, an even greater test of Mendoza's skill to choose the right instruments to adapt Zawinul's original orchestrations. As always, Mendoza's instincts are impeccable, incorporating originally improvised ideas into these broader scores.

Brown Street has an unequivocal big band feel, but never at the expense of the powerful grooves that defined Weather Report from Sweetnighter (Legacy, 1973) on. With a core group featuring Zawinul, two Weather Report alumni (bassist Victor Bailey and percussionist Alex Acuna) and Nathaniel Townsley (Zawinul Syndicate's current drummer), Zawinul's insistence on both openness and in-the-pocket rhythms remains undiluted. He once said, "Weather Report is a big band and we are a small group, too." Brown Street simply suggests a Weather Report that might have been, had it actually been a larger ensemble.

It's not all Weather Report material, though. While the ensemble covers well-known tunes from the potent "Black Market" and poignant "A Remark You Made" to the vividly swinging "Fast City" and fiery funk of the title track, Zawinul and Mendoza also revisit a couple of post-Weather Report tunes. The joyous "Carnavalito" expands to nearly eleven minutes, while "March of the Lost Children" remains closer to the original on The Immigrants (Columbia, 1988).

Most revealing, however, is "In a Silent Way." With a synth intro from Zawinul, Mendoza turns the piece into a lush tone poem that may well be the definitive version of this classic.

Mendoza distinguishes Brown Street from the Weather Report aesthetic of "everybody soloing and nobody soloing" by expanding the music and providing space for delineated solos from Zawinul and members of the WDR Big Band. But Mendoza's arrangements ensure that the essence of Weather Report remains intact throughout, making Brown Street an album that not only stands on its own, but encourages listeners to look back at the original music in a new light.