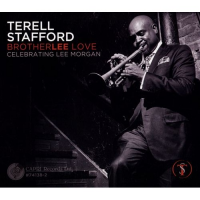 Over the past several decades, trumpeter Terell Stafford has built a solid reputation based on the fact that he is a thoroughly accomplished musician who has been heard in the bands of Bobby Watson, Matt Wilson, The Clayton Brothers, and Dana Hall. Although he has digested the complete history of the jazz trumpet cannon, Stafford remains his own man with a style and approach that is squarely his own. This fact is important because in endeavoring to pay tribute to the iconic Lee Morgan, Stafford does not merely copy. He honors Morgan's legacy while speaking in his own voice.

Stafford has assembled a varied and sagacious collection of numbers clearly associated with Morgan. He makes these pieces his own not by grafting on new structures or dramatically altering the forms. Instead, the trumpeter uses the inspiration of these classics to deliver his own stories. From out of the gate, "Hocus Pocus" announces that the fiery personality of Morgan himself is injected in Stafford's own approach to the material.

The original "Mr. Kenyatta" comes on more like a boogaloo than this new version. Stafford puts more of a bossa groove onto the number. Tenor saxophonist Tim Warfield speaks with authority and full-bodied tone, his sinewy closing line then picked up by Stafford to launch his own solo. Bruce Barth barrels along nicely with some two-fisted runs. "Petty Larceny," which Art Blakey fired up to perfection on his own The Freedom Rider LP, also seems more cooled out here, although Stafford worries a six-note phrase in the best Morgan tradition.

While Morgan offered "Candy" as a medium tempo swinger on his LP of the same name, Stafford goes for more of a ballad like approach. Drummer Dana Hall sits out on this one, while Peter Washington submits a wonderfully melodic solo. The bassist also updates the funky "Yes I Can, No You Can't" in a way that inspires Barth to one of his best statements on the disc.

The lengthiest cut of the set, "Favor" is a waltz time original by Stafford that really shows how the use of dynamics can give added texture and depth to any performance. Often today's music comes across at a single, continuous sound level. The fact that Stafford and crew are thinking about the nuances of live performance as it transfers to a recording are further signs of their maturity.

Rounding out the set, Stafford goes deep for the ballad "Carolyn." Both "Stop Start" and "Speedball" put Warfield in the spotlight, reminding us how much of a hard bop master we have in this tough tenor. Hall gets his say on the former, where his solo is bolstered by some fancy bass drum footwork. Tastefully produced by John Clayton, Brotherlee Love shows how it's done when it comes to assembling a musical homage.