Home » Jazz Articles » Brian Charette: The Question That Drives Us and Square One

Brian Charette: The Question That Drives Us and Square One

By Hrayr Attarian
May 18, 2014
Sign in to view read count
Classically trained pianist turned organist Brian Charette is an accomplished master of the Hammond B3 with an elegant yet passionate touch. His signature style imbues the many recordings of his various ensembles with a light, crisp sound and an effervescent melodicism that is, unapologetically, mainstream without being pedestrian. In 2014 Charette cut two charmingly seductive albums that delight and gratify without experimenting with innovation or breaking any radically new ground. 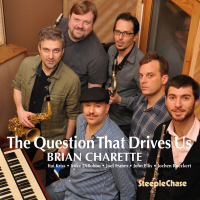 Brian Charette
The Question That Drives Us
Steeplechase Records
2014

His sixth release on the Danish Steeplechase label The Question That Drives Us finds him in the company of his unique sextet of four reedmen and a drummer as they work through ten of Charette's creations and saxophone legend Charlie Parker's "Moose the Mooche." The latter is a vibrant, up-tempo interpretation of the bop standard with altoist Mike DiRubbo's intelligent and inventive improvisation sandwiched between flutist Itai Kriss' agile and exuberant one and Charette's own ebullient and meandering chords.

Kriss' resonant notes soar over Charette's sonic waves on the undulating and expansive "The Question That Drives Us." The thematic core of this fantastical ballad is a tapestry of overlapping woodwind phrases woven tightly around Charette's emotive and acerbic keys. DiRubbo brings a poetic flair to his turn in the spotlight while tenorist Joel Frahm adds a warm, earthy touch with his.

A cinematic sense runs through the entire record from the funky "Answer Me" to the intriguing "Blazinec." The former features a soulful groove and a gritty swagger reminiscent of 1970s urban crime soundtracks. Drummer Jochen Rueckert shines with his acrobatic polyrhythms that move along Charette's greasy thick organ lines.

The latter is the most inventive of the disc with the band members engaging in free flowing yet mellifluous and contemplative conversations. Charette's tight, silken organ contrasts nicely with the horns' slight angularity. Bass clarinetist John Ellis' cool reverberations mark his lilting song while Frahm's gritty tone peppered with hints of vibrato characterizes his deep soliloquy.

The tracks also swing loose and hard and none as much as the alluring "5th Base." Ellis' woody timbre and buoyant, darkly hued sound soar over the percolating and gripping group play. The rest of the musicians take brief, tasteful solos that, as on the rest of this enjoyable session gracefully augment the main theme but do not venture far from it. 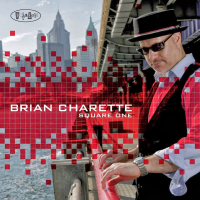 On his second release of the year Square One on the Los Angeles based Posi-Tone label Charette showcases his virtuosity on his instrument in a sparse, and more traditional, setting accompanied only with guitar and drums. Charette leads his sidemen through nine of his compositions and one each by tenor saxophonist Joe Henderson and vocalist/keyboardist Art Neville.

The Henderson piece, made famous by organist Larry Young on his landmark Unity (Blue Note, 1966), is a showcase for drummer Mark Ferber's unfettered, stormy and exhilarating flights of fancy. Charette and guitarist Yotam Silberstein take turns dueting with Ferber and egging him on further.

Silberstein brings his loose, laidback yet simmering strings to center stage on the most eclectic of the CD, the psychedelic "People on Trains." The intricately constructed motifs give way to Charette's circular and otherworldly reverberations and his intelligent, impressionistic bars.

Charette's romantic side is on display on "Three for Martina," a sweet (but not syrupy) paean to his girlfriend. His suave, sleek spontaneous expression flows with iridescence hues and contrast with Silberstein's equally heartwarming yet denser strums.

The Question That Drives Us and Square One are intellectually attractive and aurally pleasant musical works. Charette maintains the compelling momentum, on both from start to finish. With his superlative musicianship and leadership skills he assures a uniformly high artistic quality on both disc even in the absence of anything ingeniously cutting edge or trailblazing.

The Question That Drives Us

Tracks: Blazinec; The Question That Drives Us; Medium Up; Answer Me; Labor Day; Svichkova; 5th Base; #9; Denge Merenge; I Came So Far To See You; Moose the Mooche.