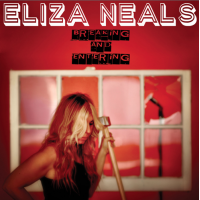 After singing the praises of one Detroit native, Greg Nagy on Stranded (Big O Records, 2015) for incorporating all that was good from Motown in his sound, another Detroit artist shoots straight out of the Motor City to Chicago and down the Mississippi River to parts unknown. Eliza Neals joins the inestimable Mandy Lemons Nikides of Low Society, who, on You Can't Keep A Good Woman Down (Ice House Records, 2014) defined the term unhinged musically.

Neals sings like a true believer whose belief is equally informed by John Lee Hooker and John Hiatt. "Detroit Drive" opens the current Breaking and Entering with Howard Glazer's driving dobro introducing the Motor City to the Mississippi Delta. The title tune is a seething, molten mass of psychedelic electric blues right out of the '70s. Glazer's overdriven lead guitar is placed even or just in front of Neals, with everything else well in the back of the mix. The engineering is intentionally rudimentary to very great effect. Neals potent voice is captured in its most natural and feral state.

"Goo Goo Glass" is like-wise propelled by Glazer's future blues guitar. Neals turns the piece into a stomping dirge that lays waste to all ahead of it. Guitarist Kenny Olsen joins Neals for the closest thing to a ballad on the disc. "You" is a wild kaleidoscope of gospel-gone-bad prayer. "Sugar Daddy" sets Neals up in a 1950s rave-up turned rabid by Shane Visbal's precise guitar playing and Tyrone Smith's saxophone. Before a reprise of the title tune (radio edit) Neals and Glazer tear things apart with "Spinning" and ode altered states and lost time. It is a stark duet of voice and guitar and a stomping foot that brings all of this music back to its basics.