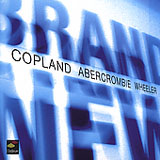 On the second of two albums to be issued in the same month—the first being his Hatology solo disc Time Within Time—pianist Marc Copland reprises the marvellously intuitive and subtly adventurous trio that released That's for Sure in '01. Copland's relationship with guitarist John Abercrombie dates back thirty years, and while his teaming with trumpeter Kenny Wheeler is more recent, it sounds like they've been playing together just as long. With a few European tours behind them since the release of That's For Sure, Brand New sounds even more in sync, and the magic of discovery that was so prevalent on their first recording has been replaced by a comfort level that never hints at complacency, instead resulting in everyone being just that much more capable of anticipating the others' every move.

Guitar and piano pairings rarely succeed, or when they do, it's because the players work out how to stay out of each other's way. But in the case of Copland and Abercrombie, it's more about creating a richer orchestral timbre that gives Brand New a broader complexion. Two players whose vastly experienced ears are finely tuned to their surroundings, Copland and Abercrombie don't so much avoid stepping on each other's toes as they intuit where the other is going, complementing and augmenting the other's voicings and rhythmic thrusts. Even when accompanying Wheeler together they seem to know just where to position themselves to create a larger sound that remains, somehow, intimate and spacious.

Given the inherent challenge of the instrument, Wheeler's articulation at 75 is nothing short of remarkable. Still capable of the signature intervallic leaps into the stratosphere that are integral to of his approach, there's simply no sign of weakening. And his uniquely melancholic lyricism remains intact, most notably on his own compositions, the introspective, darkly hued "Reach for That Other Place and the somewhat livelier "Watching Simona.

In contrast to his more ruminative leanings on Time Within Time, Copland is more direct; still, on Abercrombie's "Monk Spring, he demonstrates just how good he is at implication. During the guitarist's solo, the forward motion is the resultant combination of the two players—neither one explicitly states the time, but together they arrive at a blended swing that's even more vivid when they come together as a single voice to support Wheeler.

At first glance covering Nat Adderley's "Jive Samba might seem like an odd choice. Still, while it's uncharacteristically funky, Copland manages to imbue it with his usual magic, subtly reharmonizing the more straightforward blues changes and giving it a fresh face.

"Odyssey may be a Copland composition, but there's something about the repeating piano figure and dark ambience that brings to mind Azimuth, the on again-off again trio with Wheeler, singer Norma Winstone, and pianist John Taylor.

Brand New, like its predecessor, finds the trio in fine form. Evocative, compelling, and filled with delicate risk, Brand New nevertheless retains a soft and rounded sound that proves one doesn't have to make compromises to be eminently accessible.