BY DOUG COLLETTE
October 13, 2004
Sign in to view read count 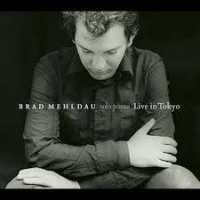 With boundless energy and seemingly endless imagination, Brad Mehldau has evolved into one of the most prolific jazz musicians in the world today. Little surprise then, that a little over six months after the latest release with his trio, we have another sterling piece of work, his first on his new label affiliation. Fans of his oeuvre are well acquainted with his live recordings both solo and in a group setting and some may miss the intricate interaction with drummer Jorge Rossy and Larry Grenadier on Live in Tokyo—at least to start. But throughout this disc, Mehldau plays beautifully on his own, his work is florid with detail, yet never just flowery. There is a deeply felt passion in all he plays, and that's exactly why he is so engrossing to hear: in a solo setting Mehldau demonstrates how he selects his ideas altogether discriminatingly from what must be a veritable flood of variations that occur to him as he plays.

It's not long into listening to Live in Tokyo that you are reminded how skillfully he runs the gamut of emotion in his playing. Like precocious guitar wunderkind Derek Trucks, Mehldau becomes so deeply immersed in his playing it's as if he is in some kind of meditation and certainly, without any religious or even secular trappings to intrude, there is a definite spiritual aspect to Mehldau's music. But it is based on a deep knowledge of jazz history and an equally profound confidence that he can pay homage to icons such as Monk and Gershwin and still transcend tribute by dint of his own technical skill and improvisational inspiration. From carefree flights of fancy to dark ruminations on a chord progression, to knotty resolutions of melodic motifs. Mehldau makes music of these songs that stands on its own, on par with the material itself, no easy task and no small accomplishment.

On 2002's Largo studio project, Brad Mehldau incorporated horns, electric guitars and electronic ambience into this solid traditional jazz foundation without shortchanging either approach. It was an utterly contemporary marriage of style, not unlike the way Jeff Tweedy and Wilco have transformed folk music into new millennium rock. Perhaps not unconfidently, Live in Tokyo is bookended by interpretations of unsung British folk iconoclast Nick Drake and in addition, during this comparatively pure solo setting Mehldau reminds us of his special fondness for Radiohead as he covers "Paranoid Android"; the young pianist covered the Beatles ("Dear Prudence" on Largo ) and Paul Simon ("Still Crazy After All These Years" appeared prominently on his early 2004 trio session Anything Goes ), proof positive he appreciates a melody both minimal and ornate, and adjusts his playing accordingly.

In much the same way he modifies his pace when performing with his aforementioned bandmates: he doesn't so much slow down as make room for them and allow them to catch up and keep pace with the flow of ideas. He is the center of gravity around which they orbit, the playing intersecting at various points on their shared plane. Alone Mehldau utilizes his right and left hands in a similar manner and in so doing, expands the scope of dynamics he uses, moving slower or faster when so moved, his playing more or less spare, more or less complex, but never merely complicated for its own sake

It's not to demean Brad Mehldau to say that, watching him on stage, as he collects his thoughts, centers himself, then bends over the keyboard to play, he recalls Charles Schulz's character Schroeder from the Peanuts comic strip. Remember how the musical notes just flow without interruption from that little guy's head when he begins to play? The effect is much the same when you watch this man, a marvelous vision not all that much less impressive when you are just listening to this disc.