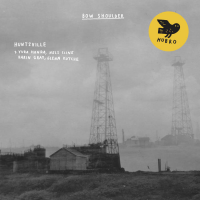 Bow Shoulder is the first Huntsville release since Pond back in March 2016. Surprisingly, it was recorded in Chicago in June 2010 and not mixed until January 2019 and April 2020. Just as surprising—maybe less so, given the album's personnel credits—is that the Chicago recording took place at the Loft, the studio and rehearsal space of the rock combo Wilco. The group's guitarist Nels Cline and drummer Glenn Kotche had previously recorded live with Huntsville at the 2007 Kongsberg jazz festival, the results comprising one disc of the double Huntsville album Eco, Arches & Eras (Rune Grammofon, 2008). The day before the Chicago recording, Huntsville appeared in the city's Millenium Park as did Kotche's duo On Fillmore, with bassist Darin Gray; that evening, Cline and Kotche joined Huntsville onstage for the final part of the trio's set. All of which makes the collaboration featured on Bow Shoulder seem inevitable; the guest list was completed by the Tokyo-born, NYC-resident composer and keyboardist Yuka Honda who herself had links to Cline having worked on a couple of his albums.

The album's four tracks, ranging in length from seven to twenty-one minutes were all improvised. With two guitarists, two bassists, two drummers and a keyboardist, there was clearly a risk of the cocktail-party-effect here, everyone speaking at once, trying to be heard above the others. In the end, thanks to the restraint of those involved and also to the way it was recorded and mixed, the music maintains an equilibrium between the seven players.

Throughout, the music is recognisably Huntsville, with the guests fitting into their sound and methodology. As a result, the soundscape is full and rich without any instrument coming to the fore to play anything resembling a solo. Instead, within the overall ensemble sound, individual instruments will occasionally attract attention for a period before being subsumed into the collective whole. Along the way, there are frequent rhythmic passages which bubble to the surface, seeming to evolve rather than being pre-planned; when such passages do emerge, all the players seem happy to reinforce them to create a groove which is sustained for a while, notably Ingar Zach, whose tabla machine is much in evidence and used to good effect.

Side Wind; Higher; Lower; The Unshot.