By Nenad Georgievski
January 24, 2007
Sign in to view read count 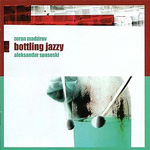 The music that Aleksandar Spasoski and Zoran Madzirov have created here clearly transcends familiar boundaries. It's evident from their background that the two players have nothing in common musically, besides mutual admiration and respect, except maybe a desire to explore musical avenues that rarely have been explored before. Spasoski, a multimedia artist, producer and designer, has been active in both in various fields of visual arts and music-making (including music for arts installations, commercials), while Madzirov is a jazz veteran who uses bottles and glasses as his instruments.

Still, both artists have proved that they are more than equal to the challenge. The duo creates gentle pulses, simple, reflective melodies and skittering electronic glitches to create a complex but focused series of collages. Even though the music has one foot in the jazz, there aren't any specific references to the jazz tradition, except for the saxophone playing of Tadeusz Rybarczeck, whose melodic quality refers to artists like Wayne Shorter or Branford Marsalis. Madzirov swings his heart out, and at moments his percussion-bottly works resemble gamelan percussions.

With the other foot in electronics, this disc lacks the rich ambient textures that are typical of Nils-Petter Molvaer's works or Jon Hassell's spaciousness, but it's weirdly organic and imaginative music where you never quite know what's going to come next. At moments its sonic riches and density are dizzying. The end result is something undefinable, as different worlds crash randomly from composition to composition.

The highlights include "After Over," "Green Card," "Sturec" and "Opa Iha." Actually, the latter piece, a traditional reel, has already been used by Madzirov for a beer commercial (where he played it on beer bottles), but this popular upbeat piece gets a different treatment here, and the result is unique.

Bottlying Jazzy is charged with a rare musciality, and in a way it's a good marriage of experimentation and wacky-funky grooves. Its mix of 21st Century texture, intelligent jazz writing and improvisational concision make it an enjoyable record.