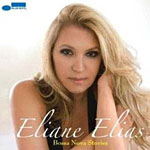 For most people, bossa nova began in 1962, the year tenor saxophonist Stan Getz's album Jazz Samba (Verve, 1962) and 45rpm pull "Desafinado" stormed up the pop albums and singles charts. That fall, "Desafinado" sold approaching 500,000 copies and by the year's end America had gone bossa nova crazy. But in its birthplace, Brazil, bossa nova emerged round about 1958, and 2008 has been declared the music's 50th anniversary. The year has seen a rash of bossa nova releases, some divine, others mundane.

Bossa Nova Stories touches on both extremes. Sao Paulo-born singer/pianist Eliane Elias grew up with bossa nova and, since moving to New York in the early 1980s, has released several albums celebrating the style. Amongst the most successful was Sings Jobim (Blue Note, 1997), featuring the work of seminal songwriter Antonio Carlos Jobim (composer of "Desafinado" and co-composer of "The Girl From Ipanema"), on which Elias was accompanied by tenor saxophonist Michael Brecker, guitarist Oscar Castro Neves, bassist Marc Johnson and drummer Paulo Braga.

The group returns for Bossa Nova Stories, without a saxophonist but with the addition of a string orchestra on half of its 14 tracks. Seven tunes are classic, mostly familiar, bossa novas, including "Desafinado" and "The Girl From Ipanema." The other seven are taken in the main from the great American songbook. Elias sings the bossa novas in Portuguese, and the standards in English. Her mellifluous but muscular piano, with its opulent block-chord passages, makes a handful of solo appearances, but is generally subservient to her vocals, which are richer, warmer and more beguiling now than they were on Sings Jobim.

The album divides almost precisely in half, with the first six tracks strikingly more successful than the subsequent eight. "The Girl From Ipanema" and "Desafinado" are given gorgeous readings, both making good use of Rob Mathes' string arrangements, and with "Desafinado" including some of Elias' strongest piano work. Two other well loved bossa novas, "Chega De Saudade" and "Estate," are included, along with a couple of standards which lend themselves particularly well to the style's gossamer rhythms and ambiance. If you'd never heard Warren and Gordon's "The More I See You" and George and Ira Gershwin's "They Can't Take That Away From Me" before, you'd probably assume they were originally written as bossa novas.

These first six tracks are a dream, lush and caressing, a balm for weary souls. But the mood isn't sustained during the second half of the album. The standards here don't sit so well as bossa novas, at least not in these arrangements, and Elias' interpretations of the Brazilian material are more workaday.