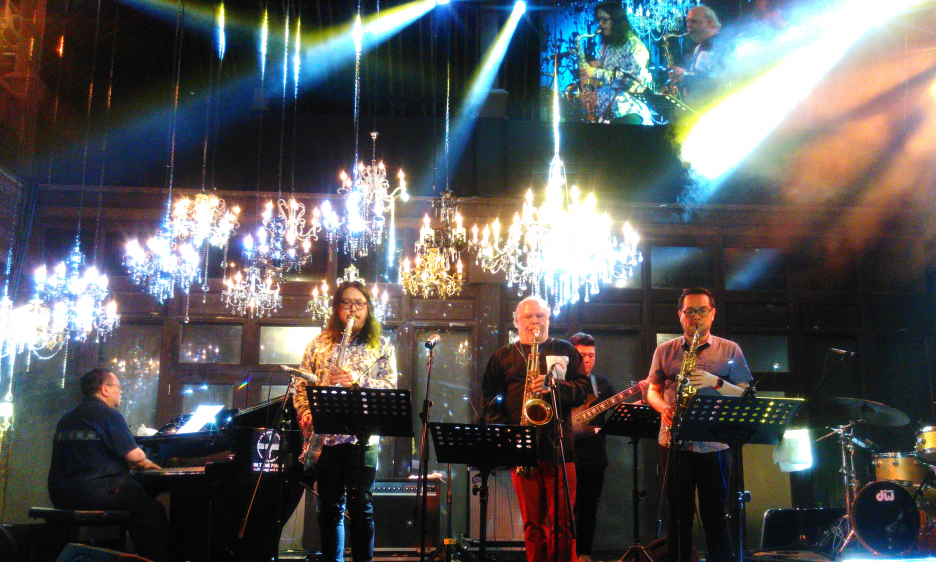 When May arrives, jazz fans in South East Asia know it is time for the Borneo Jazz Festival. It has been presented since 2006 in Miri, the second biggest city of Sarawak, one of the two Malaysian states on the island of Borneo. The new venue, the Coco Cabana, is a big wooden construction that resembles traditional Balinese architecture, beautifully located on reclaimed land between a lagoon and the South China Sea, next to Miri's seahorse-shaped lighthouse.

Just a few months ago, the artistic direction was assumed by the pianist Evelyn Hii, a Miri native who is based in Malaysia's capital city Kuala Lumpur where she runs the jazz club No Black Tie. Evelyn Hii places particular focus on collaborations of musicians from Malaysia with colleagues from around the world. Thus, the festival kicked off with the quartet WVC (alto saxophone, piano, electric bass & drums) from Kuala Lumpur, featuring the Japanese guitarist Isao Miyoshi. While WVC is influenced by the ECM sound, their Japanese guest preferred fusion which created an interesting mix.

Up next was the Brussels-based Hungarian violinist Roby Lakatos who is equally at home in classical music, the Hungarian gypsy tradition and jazz. In Miri he joined with three Asian colleagues: from Malaysia the guitarist Az Samad and Zulhilmy Zulkifli, who played an electric upright bass, and on the acoustic lead guitar Denis Chang who was born on Montreal, Canada, to Taiwanese parents. He ispecialised in the Django Reinhardt style and is involved—yes, there is such a thing!—in Taiwan's annual Taipei Gypsy Jazz Festival. In Sarawak, the four musicians harmonized perfectly and delivered a wonderful show in the spirit of Stephane Grappelli and Django Reinhardt.

For the first time ever, a festival presented both Roby Lakatos and his tenor saxophone playing older brother Tony, who has been based in Frankfurt, Germany, for many years. Tony performed in the Borneo Jazz Festival Band with two other reed players: Julian Chan from Malaysia (alto saxophone) and Li Gaoyang from Beijing/ China (tenor). The band was led by the Singapore pianist Jeremy Monteiro. They performed standards and compositions by the two tenor players. A jam session closed the first night. The second jam started in the afternoon on the smaller Fringe Stage with the piano trio of Sri Hanuraga from Jakarta. They played interesting arrangements of Indonesian folk songs which suddenly sounded very jazzy as if they had been created for an improvising band. Another fusion followed with the Beat Goes Bach project of the Malaysian pianist Mei Lin Hii. Together with the Italian drummer Lorenzo Brilli, she gave a new twist to compositions of Johann Sebastian Bach.

Taiwanese guitarist Ying-Da Chen's quartet played in a style that ranged from chamber music and free improvisation to pop elements from different eras. Deep Straits is a trio led by the Malaysian pianist John Dip Silas who works with colleagues from Singapore: Jonathan Ho (bass) and Benjamin Low (drums). In January, they recorded an album at the No Black Tie club in Kuala Lumpur. Special guest at the recording was the already mentioned Tony Lakatos, and the four musicians played a live set in Miri to launch the album that was released on No Black Tie Records. The evening on the main festival stage started with JASSO, the Jazz Association Singapore Orchestra, directed by Jeremy Monteiro. The band featured some international horn players as guests and played instrumentals as well as a few songs done by vocalists from Singapore and Malaysia. The musical spectrum ranged from swing oldies to the Pee Wee Ellis funk classic "The Chicken." Grzegorz Karnas from Poland and his trio presented a very special kind of vocal jazz while the mostly very young members of the Malaysian band NewSound played an enjoyable mix of mainstream jazz, latin and fusion elements. Next was the Borneo Jazz Festival Band again, this time led at the piano by Michael Veerapen, one of Malaysia's most respected jazz musicians. And a rousing finale was provided by the Havana Social Club, a latin jazz and salsa band led by the Cuban drummer Pablo Calzado. He is based in Singapore like most of his band members who come from Cuba, Colombia, Venezuela and other countries. Special guest was the Adelaide-based Cuban trumpeter and singer Lazaro Numa who had come all the way from South Australia. The last festival day started with the finale of the first Borneo Jazz Talent Search. Six bands from the Malaysian states of Sarawak and Sabah as well as from the neighbouring sultanate Brunei played three tunes each. In one case it was much more pop music than jazz and the artistic quality varied pretty much. But there were some very fine young local players and the jury did not have an easy task to accomplish. After that, there was an interesting panel discussion, talking about "Connecting Europe & Asia through Jazz."

The evening presented Marques Young from the US, who has been based in Malaysia for the last seven years. He is a brilliant classical trombonist but he also has a second life as an r&b and jazz player and vocalist under the name Q Sound with a Malaysian band. Unfortunately, at Borneo Jazz he played only a bit and concentrated on singing soul music. The final band was Nadir, a young group from Kuala Lumpur that mixes jazz with pop, Heavy Metal and even Indian classical music. They had invited, as a special guest performer, Malaysia's star singer Zee Avi who is a native of Miri, the city that hosts Borneo Jazz, but is based currently in Los Angeles.

A jam session, during which Q Sound (finally!) displayed his skills on the trombone and the piano, closed Borneo Jazz for this year. But, as they say, after the festival is before the festival.