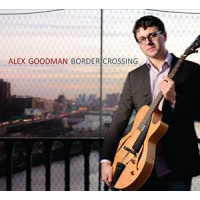 Border Crossing was born of guitarist Alex Goodman's careful cogitation concerning his move from Canada to New York. It's a beautifully contemplative bridge-builder of an album, bringing together musicians from both realms and connecting classically-oriented ideals, jazz language, and modern thought into a seamless whole.

In soaking in the seven tracks presented here, it becomes apparent that the instrumentation and specific personalities on each instrument have a strong influence on the shape of this music and the overall outcome of the project. That may seem like a simple and unnecessary statement of the obvious, applicable to any jazz-oriented album under the sun, but it need be said since that idea carries more weight than usual here. Take out any single ingredient—Goodman's focused and investigative single note guitar lines, Felicity Williams' beautifully diaphanous vocals, Michael Davidson's glowing vibraphone currents, Andrew Downing's refined and supportive cello and bass work, Rogerio Boccato's subtle percussive seasonings—and you have a very different result. Even adding to that mix, as Goodman does by bringing drummer Fabio Ragnelli into the fold on three tracks, alters the sonic chemistry. Ragnelli does a superb job, but the addition of anything can't help but upend the sound of those beautifully entwined instruments.

While the majority of Williams' contributions are wordless, she sings of "searching for something more" and "actions with substance" while fleshing out the story on the album-opening "Acrobat." On the surface those words are merely tools in the telling of the tale, but in a deeper sense, each is an artistic motto that connects directly to this project. Goodman stays true to those philosophical snippets by winding his way over the gentle and heavenly ebb on his own compositions, transforming Mozart's "Eine Kleine Gigue" into a dovetailing chamber jazz delight, and turning the unsettled into the beautiful and wispy on "Pure Imagination." And his colleagues are so incredibly in tune with his way of thinking. They ably work standard background-foreground roles and prove most impressive in their ability to overlap and fold in on one another, erasing and blurring borders as often as they actually cross them.