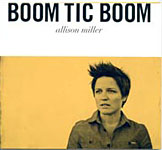 Opening with a set of cymbal crashes amid a tight-knit kit rumble that segues into the rhythmic pulse, drummer Allison Miller begins her second album with "Cheyenne," one of four original compositions written for this group. Joining Miller in her trio are Myra Melford (piano) and Todd Sickafoose (bass). Violinist Jenny Scheinman does a sprightly guest spot for Miller's "CFS (Candy Flavored Sidewalks)."

The leader's music is infectious. Its multiple chorus structure brings with it an orientation that is unselfish. The character of her drumming is positive and sensitive to timbre. Furthermore, she makes every attempt to bring out the percussiveness of her instrument with clicks, cymbal hisses and scrapes, allusions to reverb and brush and cymbal work so fluid that it resembles water misting or swooshing across a fine sandpaper surface. Omnipresent is the sonic fullness ushered in by her unusual accentuations and figures.

Melford and Miller are perfectly matched. The two both can render boppish tempos, as heard especially in Mary Lou Williams' "Intermission." Melford's piano technique is open and well defined and her compositions "Big Melting Snow" and "Night" tend to upend conventional rhythm and melody; their musical lines communicate abstraction, dissonance and an unmistakable lyricism.

Sickafoose offers an unshakable ground with his ample pizzicatos, enriching Miller's off-center composition "Fead." He squarely places the rhythm down for "Intermission" and "Big Lovely" while the suppleness of his phrasing during Hoagy Carmichael's ballad "Rocking Chair" is as captivating as the piano's mainline delivery. His cultivation of the non-thematic is as full of bravura as Melford's angular approach to the keyboard. But nothing could be more compelling than the trio's successfully direct and skillful approach to a variety of musical styles.