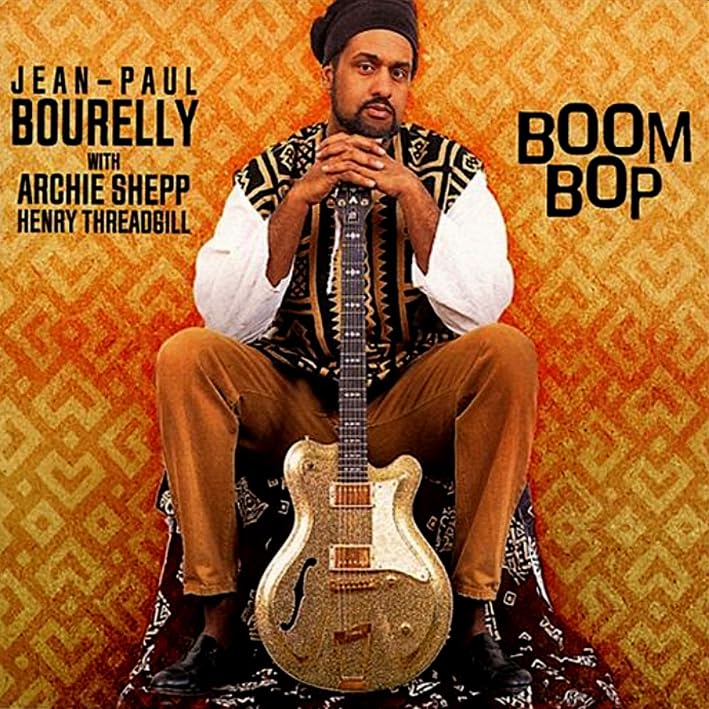 Jazz has always been about the fusion the different music. And at one time way back, so was rock, country and classical. Now they become what is called ‘cross-over’ music, usually a watered down sound, that neither genre finds acceptable. Guitarist Jean-Paul Bourelly probably doesn’t consider himself a jazz musician, with all the limitations the definition suggests. Born in Chicago of Haitian parents, he received an AACM education before his Brooklyn M-BASE experiences with Cassandra Wilson’s groups and tenure with Elvin Jones, Rod Stewart, Pharoah Sanders and Miles Davis. He plays a self-described “African Ambient Music.”

Boom Bop is anything but ambient. It recalls rock/funk experiments of Sonny Sharrock, Jamaaladeen Tacuma, Blood Ulmer, and recently Vernon Reid. Bourelly has often been described as a Jimi Hendrix disciple, a tag he has, at times, embraced. Hendrix’s psychedelic rock does enter into the equation here, but so does funk, African, hip-hop, blues, and jazz. The record is built upon African rhythms and beats, music that is reclaiming its identity from the smorgasbord ‘world-music’ moniker. Senegalese vocalist Abdourahmane Diop shares the spotlight equally with Bourelly, as on “New Afro Blu,” where his traditional language duets with the guitar and Bourelly’s Hendrix-blues singing. The African-centric sound plus America’s invention, the blues, jazz, and their offspring, rock are all present.

Represnting the jazz world are saxophonist Henry Threadgill and Archie Shepp. It is Shepp, the voice of post-Coltrane ‘new thing’ jazz, that stands out here. His very distinct raw sound has not been heard (on record) recently and this performance leaves you wondering why. He bridges the music from Africa to hip-hop. The sole track with rap lyrics, “Invisible Indivisible” updates African-American music to this new millennium, threading guitar lines over bass-heavy beats that give way to Shepp’s saxophone statements that speak as loud as any words. For a guitar-lead album, Bourelly relies heavily on African drumming for context. He succeeds where Paul Simon’s Graceland faltered, he kept the music real and avoided a self-centered approach to fusing disparate music.