The group may be obscure and the album lesser-known, but it’s a gem. 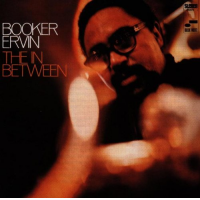 There's a kind of music I like to think of as harder bop. It's a lot like conventional 1950s hard bop, but tougher, more muscular, more cerebral. Booker Ervin's The In Between is that kind of record.

Ervin has an edgy style. It starts with a John Coltrane feel, then pushes a little further. Not into the crazy, atonal, unapproachable territory that Trane created in his later years, but into music that's more from the head than the heart.

At least, that's how The In Between starts. The title cut is fast-paced and challenging. There's not much melody here—and that's something that often turns me off. Here, though, it's simply exhilarating. Ervin and trumpeter Richard Williams go for a wild ride, with drummer Lenny McBrowne bashing the skins like some jazz version of Keith Moon.

The second cut, "The Muse," is more of the same. It starts with an intriguing two-minute intro that's gentle and Middle Eastern, with Ervin on flute and Bobby Few on piano playing a soothing melody that sounds like it was lifted from a Beirut marketplace. And just when you think you've got the vibe, it changes abruptly into a breakneck, harder bop cooker, then ends with the earlier Mideast feel. It's exciting.

The rest of the album is just as eclectic. "Mour" and "Sweet Pea" are typical mid-tempo hard bop tunes that could have been done by the 1950s Jazz Messengers. "Largo" is a sweet, lyrical ballad. And the final cut, "Tyra," is the kind of swirling blues noir that always makes me think of old black-and-white private eye flicks starring Humphrey Bogart. Far from cerebral jazz, this is blues with feeling.

The In Between features six original tunes, all by Ervin. All are captivating. The group may be obscure and the album lesser-known, but it's a gem.

Availability: They must not have made many copies. There aren't many around.