By WALTER KOLOSKY
February 13, 2003
Sign in to view read count 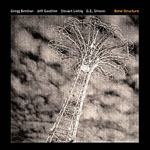 Bone Structure is something different: post-jazz fusion-progressive rock-electronica-jam band music that features a wily sinister vibe. Some of the infectious grooves are reminiscent of those laid down by Ginger Baker and Jonas Hellborg on Baker's very fine and underrated Unseen Rain from several years back. Other influences can be heard as well. From time to time guitarist G.E. Stinson sounds remarkably like John McLaughlin from Miles Davis' Live Evil. There are also allusions to works such as Weather Report's "Mr. Gone" and "Saturn Return" from Elements.

The point of mentioning these influences is to provide a musical vantage point. Please don't believe that the music is derivative in any way. In fact, it is quite original and somewhat dangerous. I must admit that I find it difficult to listen to the entire album in one sitting. I am from the old school and still not quite used to sitting still for seventy-five minute albums. But the real reason for the difficulty is that the musical intensity released by these players is quite an overwhelming experience. One gets the sense that you are listening to a soundtrack of a very good science-fiction movie in which perhaps some not so very good things are happening.

Bendian does stupendous triple duty on the album, playing drums, glockenspiel and piano. Jeff Gauthier plays some very haunting electric and acoustic violin. Steuart Liebig's bass is a force for evil in the grooves and Stinson's acid guitar is a revelation as are his contributions on "implements." These "implements" create what I would call electronic noises. I have never enjoyed such noises until I heard this album. They are distinct yet indistinct parts of the music. You'll actually have to listen to Bone Structure to appreciate that last sentence.

The music was actually recorded in 2000, but the album was not released until this year. The band claims all of the music was improvised on the spot. If this includes the "implements" sections, it would make this claim doubly impressive. Something else about the album is quite intriguing: the sound appears to all come from the center channel and then branch out as if it was being released through an upside down funnel or one of those old RCA Victrola horns. I don't know how they got this effect or even if it was intentional, but it gives the music a very strong hypnotic center.

Choosing specific tunes to illustrate these points would be a pointless exercise. The album is thematic in nature, with 12 tunes somehow interrelated to make a cogent whole. This is very serious and exciting music, dark and thought provoking. Don't think you can just listen to it half-assed.