BY DOUG COLLETTE
December 18, 2016
Sign in to view read count 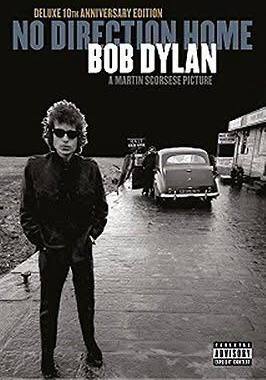 As originally released a decade ago, Martin Scorcese's Bob Dylan documentary No Direction Home is so deeply illuminating it really bears no revisionism that would improve it, at least on its own terms. In turns exhilarating and chilling, particularly in the final scene where the subject of the film appears the embodiment of infinite fatigue, the vaunted filmmaker's comprehensive depiction of the Nobel Prize winner's rise to international fame in the mid-Sixties vividly captures the joyfully abandoned sense of purpose in Dylan's work of the time.

The Deluxe 10th Anniversary Edition adds two and a half hours of content to the original three hours plus and, in a smart move in marketing wise and pragmatics, splits the new features as well as the Scorsese film itself, between two DVD or Blu Ray discs. Though the documentary alone compels a complete viewing once it begins, this canny programming allows for an entire day of viewing to absorb the material en toto or in bits and pieces of the bonus features. The new inclusions are akin to changing the frame on a painting so its details stand out in greater relief.

On the second disc, interviews with Dylan's peers in his folk days paint a vivid picture of the Greenwich Village they all inhabited as they plied their craft. Set in an abandoned coffee house and offered more as a monologue than a question and answer, Dave Van Ronk's segment sets a scene that renders Bob's rise to fame as more improbable than inevitable: Van Ronk's refreshing candor, as in speaking about Dylan's backing musicians often lacking discipline, adds credibility to his citing Dylan with formulating singer-songwriter as we know it today. In a most astute sequencing, a similar piece with Liam Clancy follows immediately, wherein he waxes rhapsodic about Dylan's poetic nature, his recollections and ruminations foretelling the mercurial shifts Bob has enacted in his career. Both intervals reaffirms the evolving story Scorsese tells in his film.

Meanwhile, Scorcese himself is both frank and self-effacing as he describes his intent to find a reasonable narrative for this film, then pursue it in such a way he invites in the audience and holds on to them. The auteur's frequent mentions of music as he transposes its inherent mechanisms to film, almost suggest his devotion of creativity to Bob Dylan was an extension of his work on his series The Blues (PBS, 2003) and the filming of The Band's The Last Waltz.

Inclusions of special features add to the cohesion of a release where the extensive content lives up to its subtitle, but otherwise belies its nondescript packaging. An unused promo film for "Positively 4th Street," the followup single to "Like A Rolling Stone," alludes to a point Van Ronk referred to, that is, the schism of adoration and enmity Dylan provoked when he went electric (mirrored in the acoustic/electric concert concept he adopted).

And while the original trailer for the film seems the usual commercial hyperbole at first, when it appears at the end of over this five hours of content, it becomes almost an understatement. A snippet of film recorded by a Dylan crew member, the so-called "Apothecary Scene," may seem random and unrelated to what surrounds it, but in these few whimsical moments, the impromptu street corner exercise in absurd wordplay reminds that the Dylan of this often harrowing period retained his sense of humor

Even in their largely a capella delivery, guest performances by Mavis Staples, Joan Baez and others illustrate what fertile ground for interpretation are Dylan's songs. At the same time, eight full-length performances by Dylan himself, from various stages of his career, solo and with accompanists, will whet the appetite not just for the rest of No Direction Home, but quite possibly Bob Dylan: The 1966 Live Recordings (Legacy Music, 2016) with the Band, (nee the Hawks, as they were then known) released coincidental to this title.

The former illustrate the challenges that come with interpreting Dylan in order to convey as much of the nuance as possible in both lyrics and melodies-Baez parodies his caricatured vocal style to deflect the personal meaning of "Love Is Just A Four Letter Word"-while the latter reaffirm what an idiosyncratic performer the author actually is, so much so he inspires artists who cover his material to find their own personal take on the songs.

All of which is well-established but bears repeating, which is ultimately why No Direction Home in its Deluxe 10th Anniversary Edition is worth finding, keeping and watching often, even more so than in its original form.