Bob Dylan and The Band: Down in the Flood 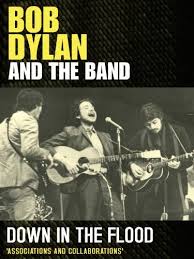 Bob Dylan and The Band

Down in the Flood: Associations and Collaborations

Unless the man himself and the remaining survivors of The Hawks reveal their recollections, the work and play in which Bob Dylan and the Band engaged in Woodstock New York late in 1966 and 1967 will forever be swathed in mystery. This despite the best efforts of the filmmakers who created Down in the Flood, covering (almost) exhaustively the cycle of the seasons spanning that now legendary time in the Catskill retreat through interviews with musicians and musicologists including The Long Ryders' Sid Griffin, author of the noteworthy in itself Million Dollar Bash (Jawbone Press, 2007) and Nashville guitarist Charlie McCoy, who has perhaps the most unique vantage point as Dylan accompanist on Blonde on Blonde (Columbia, 1966) and John Wesley Harding (Columbia, 1967).

The interspersing of rare video with familiar photographs makes for a somewhat halting narrative at first, despite efforts to provide continuity from subject to subject. Captioning the interviewees as they appear would provide a more credible foundation for the story as it unfolds, particularly as some figures (Band co-musician and producer John Simon) are much more insightful and articulate than others (music writer Anthony De Curtis). It's more than a little surprising that tenured rock critic Robert Christgau appears to lack both poise and authority, as he seems to be trying too hard to make his points; near the end of the film, however, his reference to Dylan's latter-day tours as a direction extension of the much-ballyhooed 1974 reunion with the Band, is most provocative.

During the course of the segment devoted to The Basement Tapes (Columbia, 1975), which actually goes back to the birth of The Hawks and their original connection to Bob Dylan, Griffin astutely points out the wizened experience of the Hawks backing Ronnie Hawkins in Canada made the booing at concerts easy to ignore (except drummer Levon Helm who departed the group in 1966), while DeCurtis, prone to hyperbole, still makes cogent points on exactly how contrary Dylan was being to the taste of the times: "Like A Rolling Stone" was a six minute hit single—released when two-and a half minutes was de rigeur—not to mention light years beyond the usual pop fodder in subject matter. Meanwhile, the former darling of the folk community was aggressively rebellious to his changing constituencies: initially alienating the Newport Festival audience in 1965 by going electric, he then went to play both folk and rock in the heart of conservative America where his enlightened likes might not have been quite so welcome.

What's most revealing about the investigation into this period of Dylan's history is how it sheds light on his later career, particularly in terms of his pursuit (with the Band in tow) of the genuine roots of folk music and country music as it goes back beyond his idolatry of Woody Guthrie; the man's probe into authenticity early in his New York residency actually make his early electric work, in part inspired by the popularity of the Beatles, seem as much of a digression from his artistic evolution as any pop artist who tailors is work to the mainstream only to then return to his true calling.

Author of Across the Great Divide: The Band in America (Hyperion, 1994) Barney Hoskins is increasingly prominent as the narrative wends its way into the group's own recordings and the impact of Music From Big Pink (Capitol, 1968) on the rock cognoscenti of the times, including Eric Clapton (who is said to have decided to leave Cream upon hearing the record) and George Harrison (who befriended Dylan himself around this time). The more far-reaching cultural impact of the follow-up The Band (Capitol, 1970) is laid out in very pragmatic terms in Hoskins' British accent, but this follows a point made only in passing, about the lack of communal songwriting credits for the album: with Robertson retaining sole ownership of the tunes, a rift arose between him and Helm, the ultimate extension of which resentment took the form of the drummer/singer's bitterness at the dissolution of the Band even in the midst of the famous celebratory event known as "The Last Waltz" in 1978.

A fine companion piece to a similarly conceived DVD, The Never Ending Narrative 1990-2006 (Chrome Dreams, 2006) this DVD offers (re)introduction of significant figures to contemporary discourse on a bountifully creative period of American music. Besides being involved with Dylan and the Band, keyboardist/engineer/producer John Simon went on to work with Al Kooper as he put together the original Blood Sweat & Tears as well assisting with The Electric Flag, the band begun by America's first guitar hero Michael Bloomfield upon his departure from Paul Butterfield's groundbreaking blues group. Sid Griffin's work is worth exploring as well on various fronts too: not only did he front the aforementioned seminal alt-country band, but pursued the genre's history back to its germination in the hands heart and mind of the late Gram Parsons, with a biography of the founder of The Flying Burrito Brothers and the escort of The Byrds into the country realm, via recording in Nashville, circa Sweetheart of the Rodeo (Columbia, 1968).

Far more than just a curio, Down in the Flood: Associations and Collaborations may be as close as we come to definitive until the parties involved present their own recollections and perceptions of this epochal time.