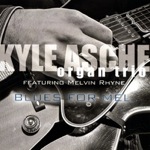 Chicago-based guitarist Kyle Asche opens his sophomore release, Blues for Mel, with the set's title tune, a tribute to Melvin Rhyne, the organist who most famously played with guitarist Wes Montgomery on four stellar Riverside releases in the late fifties and early sixties. The tune is a cool Montgomery-ish ride, drenched in the organ trio tradition. Asche's licks are clean and concise. The drummer, George Fludas, accents the trio sound with finesse and subtle flourishes, a polished energy, and the organist injects an assured, sometimes percussive bounce to the sound, much in the Montgomery Trio mode. No surprise there, because the guy on the organ is the very man who accompanied Montgomery on those legendary Riverside dates, Melvin Rhyne himself.

Asche's debut effort, The Hook-Up (OA2 Records, 2005), was a top-notch organ trio outing, with saxophonist Scott Burns sitting in on a few tunes. Blues for Mel is a straight organ trio, stepping things up another notch. The outing embraces the tradition, with that quintessentially American mix of guitar/organ/drums evoking images of big American-made cars cruise-controlling down big highways, soulfully laid-back.

Ache penned the opener/title tune along with "Forget New York," a bluesy wee hours lament. Rhynes composed four of the cuts, including the jaunty strut "Killer Ray" and the gas pedal to the floor (on the big open highway) "Nite Vidual."

The trio rounds out the set with inspired takes of some standards—"I Thought About You," "Swedish Schnapps," and a pensive turn on the pop hit "Who Can I Turn To?," showcasing Asche's lyrical side. Michel Legrand's "Watch What Happens" has a zingy spring in its step, and "Snapshot," another Rhyne tune, features the organist in a particularly exuberant mood as he teams with Asche's sharp, energetic guitar licks.

On The Hook-Up Ache and his band sounded way too seasoned for a group on a debut recording. Blues for Mel proves that debut was no fluke.

Blues for Mel; Gentle Rain; Snapshot; I Thought About You; Nite Vidual; Killer Ray; Watch What Happens; Swedish Schnapps; Too Late Now; Forget New York; Who Can I Turn Too?; Killer Ray.