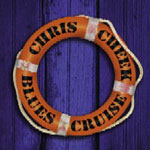 Saxophonist Chris Cheek is such a hardworking New York sideman that it's understandable that he hasn't been recording prolifically as a leader. Still, his last CD, Vine, appeared in 1999, so his new quartet set, Blues Cruise, is his first release in six years.The long hiatus certainly seems not to have produced any sense of anxiety or hurry, however. If Blues Cruise stands out from the current crop of recordings from the NYC saxophone crowd, it's due to its lack of urgency.

And in its sense of tradition, it's startlingly uniconoclastic. Cheek plays tenor, alto and soprano saxophones here, joined by Brad Mehldau (piano and Fender Rhodes), Larry Grenadier (bass) and longtime Cheek collaborator Jorge Rossy (drums). The title is perfectly descriptive: the nine tunes (five by the leader) are mostly variations on blues structures, and if they don't all cruise, neither do they gallop or scurry. This is very much a traditional jazz session, and it isn't about grand gestures. It's about creating an atmosphere where the small gestures count.

The question here is whether they do. The album starts with the Ted Grouya/Edmund Anderson standard "Flamingo, which is lightly fuelled by an almost bossa nova rhythm that's deftly up-tempo and simultaneously unedgy to the point of blandness. Mehldau turns in a block chord-peppered piano solo that's awfully good, but the group performance as a whole—as on a good number of the pieces here—fades from the listener's consciousness alarmingly quickly after its final notes pass. The Cheek original "Coo isn't very interesting, either, with a minor-key descending theme that bears a substantial resemblance to "Nuages. Grenadier's bass lassos rather neatly around Mehldau's Fender Rhodes solo here, and Cheek's succeeding solo does shoot some sparks into Rossy's accompaniment, but the song is dull.

"Squirrelling is very good, however. Its loping, bluesy 6/8 time maintains the old-school, after-hours atmosphere of the album, but injects a needed vim that lifts the song up into the realm of the engaging, and then some—the joie de vivre/doldrums meter finally skews towards the former extreme. Granted, this song's more up-tempo than a lot of Blues Cruise, but there's more to it than that—both the leader and Mehldau contribute joyously earthy solos here over Rossy's relaxed cymbal swagger, and while there's no loss here of restraint or taste, there's not too much of those qualities here either.

The title track, a Cheek-composed alto/Rhodes feature with a nicely charged atmosphere, is a winner as well. Rossy's measured 4/4 pulse carries the slightest touch of foreboding, and it's fun to hear Mehldau's light touch on Rhodes, in both his comping around Cheek's fantastic alto break and his own sighing solo.

If Cheek's recording output as a frontman was greater, Blues Cruise wouldn't seem so disappointing. Certainly, its good tracks are very good indeed. If they weren't outnumbered by the dull ones, the album's airy, blowing-session blues would be downright refreshing.