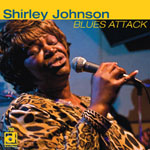 Shirley Johnson can't be accused of lacking musical experience. The weekly artist in residence in Chicago's Blue Chicago club for the last seventeen years, she brings all of that to bear here in a program which exudes the kind of authority only experience can instill.

She covers bases too. The title track is notable for its funk content as much as anything that falls within the blues, but it doesn't seem to matter as she has the kind of voice that's capable of handling a range of material. She never strives for effect, even in the heat, and her work is all the more telling because of it. Luke Pytel's guitar solo is, by comparison, overwrought; but then, this is the singer's show.

Pytel's downright stately on the slow tempo of "You Shouldn't Have Been There," which is just as he should be. Johnson reads the unapologetic lyric well, making more of it than a lesser interpreter of song might. The band burns on a low flame too, making for an overall performance that's nuanced and deep.

"Felt So Good" offers more of the same dynamically, but Johnson manages to tease something out of a lyric which covers the abiding theme of the mistreating man, albeit from a relatively fresh angle. In his tenor sax solo Lawrence Fields straddles the divide between uptown and down-home, in so doing enhancing an overall performance rich in detail.

"Selfish Kind Of Gal" is bright and sassy for all the right reasons. It's evident here that Johnson doesn't do declamatory even when she's reading a lyric that would do it justice. Instead she's a singer not a screamer, and in dealing with such profoundly secular joys as she does here, it's clear, too, that she doesn't need salvation, if only for a moment.

"Take Your Foot Off My Back" ups the funk quota again, but there's never any doubt that Johnson can handle it. She alters her phrasing accordingly and she's more than comfortable with the switch. Again the lyrical theme is nothing new and in essence she doesn't bring anything new to it. What she does do, however, is more than enough, with her very lack of histrionics throwing light not only on the lyric but also the quality of her voice, about which there's no doubt.

"Lost And Alone" is the sort of thing that Otis Redding might have handled. With Johnson it's in good hands, as she again proves what an effective reader she is, taking the lyric like a woman who relishes every word.

You're Reckless; Blues Attack; My Baby Played Me for a Fool; 634-5789; Just Like That; You Shouldn't Have Been There; I'm Going to Find Me a Lover; Felt So Good; Unchain My Heart; Selfish Kind of Gal; Take Your Foot Off My Back; Lost and Alone; Let It Rain; You Just Using Me.