By JOHN KELMAN
November 5, 2004
Sign in to view read count 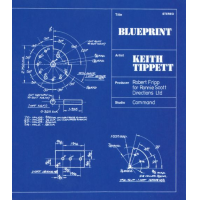 Following the sound and fury of his fifty-piece big band Centipede's '71 recording, Septober Energy (reissued in '00), British pianist Keith Tippett scaled things down for Blueprint , released in '72 and also recently reissued on CD by England's BGO records. Tippett had already created some waves with his first two releases, You Are Here... I Am There ('69) and Dedicated to You But You Weren't Listening ('71), both larger ensemble works with the involvement of some of the period's cream of the British jazz scene. But while certain remnants of the brashness found on those recordings persist, the more intimate surroundings of Blueprint find Tippett aiming for a more completely spontaneous compositional approach.

While some of the pieces on Blueprint reach higher levels of intensity, in particular "Woodcut," which ranges from near silence to pure cacophony, courtesy of Tippett's Cecil Taylor-like attack, Roy Babbington's assertive bass, Julie Tippetts' shrill recorder and Frank Perry's extroverted percussion, the overall atmosphere is one of introspection. Even on "Blues II," where Tippetts' mandolin seems to be in an unusually constant state of flux, Tippett's piano utilizing techniques inside and outside the box and Babbington creating rich arco swells, there is a certain sense of the extreme, but within a more tightly controlled environment than on previous recordings.

"Song," which opens the disc, presents Tippett at his most lyrical; yet within this more melodic setting, with only Babbington's bass and Keith Bailey's hand percussion fleshing out the space, there is an element of mystery, a darker ambience which never quite resolves. Equally "Glimpse," which places Tippett in a trio with Babbington and percussionist Frank Perry, proves Tippett to be an impressive in-the-moment player, a skill which Blueprint producer and ostensible King Crimson leader Robert Fripp would use to great effect on some of Crimson's most adventurous recordings, most notably Lizard , where Tippett's jagged and reckless playing provides stark counterpoint to the lush mellotrons and richer horns.

But freed of the more rigid confines of song form that was always a characteristic of early '70s Crimson, on Blueprint Tippett is more free to explore without restraint. One texture that elevates the explorations on Blueprint beyond your run-of-the-mill free improvisation is that of Julie Tippett's voice. While it is the deeper sense of empathy shared by all the players that makes Blueprint so compelling, on "Blues I" which, like "Blues II," has virtually nothing to do with the blues, Tippett's wordless vocalizing seems to synchronize seamlessly with Keith Tippett's piano.

Blueprint , a precursor to Keith Tippett's equally introspective yet daring Ovary Lodge (RCA, '73), is not an album for the faint-at-heart. Even in its use of silence and space it creates an audioscape that is imbued with a clear sense of danger. Still, for an insight into the capabilities of a relatively young Tippett, as well as a more balanced picture of Babbington, better known for his more fusion-based work with Nucleus and Soft Machine, one could do far worse than to start with Blueprint.